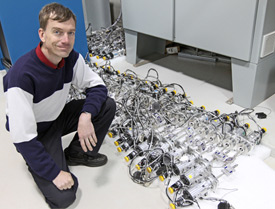 Venerable astronomical institutions rarely partner with large media companies to build new observatories. But such a collaboration is about to come to fruition on a 7,760-foot summit near Flagstaff, Arizona. Construction is essentially complete for the 4.3-meter Discovery Channel Telescope (DCT), a partnership between Lowell Observatory and Discovery Communications Inc. First light is expected to take place this coming May. 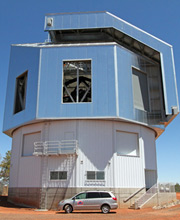 Former Sky &Telescope editors Edwin Aguirre and Imelda Joson have contributed a behind-the-scenes look at the DCT in the February 2012 issue of S&T. Their article describes the construction and scientific objectives of the DCT, and why a television-production company would want to build an observatory. Edwin and Imelda took most of the photos in the article during their May 2011 visit to the DCT.

As is usually the case with print magazines, S&T didn’t have enough space to run all the photos taken by Edwin and Imelda with their article. Below, you'll find more of their photos, alongside a transcript of an interview with Lowell Observatory director Jeffrey Hall.

An Interview with Jeffrey Hall

Lowell Observatory director Jeffrey Hall has been studying the Sun and solar-like stars since 1994, as part of Lowell’s Solar-Stellar Spectrograph project to learn more about the Sun and its effects on Earth’s climate. His article on the Sun’s twins was featured in S&T’s July 2010 issue. Here are excerpts from the authors’ recent interview with Hall about the Discovery Channel Telescope and its future:

Jeffrey Hall: The DCT is designed to be a general-purpose, 4-meter-class telescope. It’s therefore not going to be far-and-away the best instrument for any specific project, but instead will provide a solid, state-of-the-art platform for a variety of projects.

Given that 8- to 10-meter-class telescopes have been built in recent years, what is the special niche that the DCT can fill?

Lowell’s sole ownership of the DCT allows us to consider large-scale or long-term observing programs that would be unfeasible at many comparable facilities due to the large amounts of observing time required. This niche is often called “time-domain astronomy,” and it’s specifically noted in the recent Decadal Survey as one worthy of support. Here the DCT will excel. 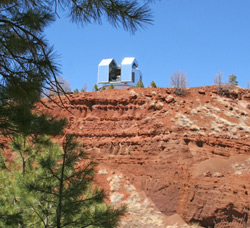 How is telescope time going to be allocated among Lowell astronomers and researchers from other institutions?

There will be an internal time-allocation procedure that will award access to the DCT in proportion to the partners’ financial contribution.

How does the nature of the DCT’s funding compare to other large, recently constructed telescopes?

The DCT is notable — though not unique — for its level of private funding. Other telescope projects had taken advantage of private funding, but in DCT’s case, roughly 40% of its capital cost has come from the Discovery Channel and other private donors, and Lowell has funded or is funding much of the rest from its private reserves. While some of the instruments are funded through National Science Foundation and NASA grants, the telescope itself has been built without a dime of taxpayer money. That’s unusual.

Could the funding for the DCT serve as a paradigm for the construction of future major telescopes? 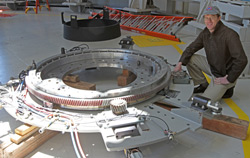 Possibly, though it’s hard to do because of the sums involved and the greater number of competing priorities at other astronomical institutions with access to substantial private resources, such as universities. In Lowell’s case, we’re a private, non-profit institution devoted exclusively to astronomy so we can focus our institutional will more than, say, a liberal arts college. However, it’s certainly possible that, as competition for federal dollars continues to increase while at the same time those dollars dwindle under rising budgetary pressures, observatories, universities, and comparable institutions may be forced to think increasingly in terms of private support and interest in science to sustain their mission. We’re fortunate at Lowell to have a substantial foothold in that arena already.

One thing that makes the DCT particularly interesting is the involvement of a major cable TV network. What is the intended educational role of the telescope beyond employing astronomers and post-docs and providing material for Discovery Channel TV programs? 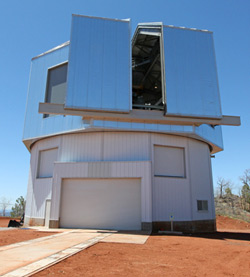 The involvement of Discovery is perfect for Lowell — our founder was one of the great popularizers of his day and our DCT partner is one of the foremost purveyors of science to the public in the present day. Discovery doesn’t want time on the telescope or to direct what research is done with it; they want to leverage the telescope’s results by making it what they call one of a few “pillars” of how the company brings scientific content to its global audience, especially young people.

Thus, the educational role of the DCT has a lovely feedback loop. We inform and educate the public about our research because we like to, and the interest this engenders helps us continue our research and sustain the institution. In the largest sense, it makes Lowell’s research a partnership with the public. That’s not just good for us … it’s good for science!