The Drama-Ridden Couple of R Aquarii 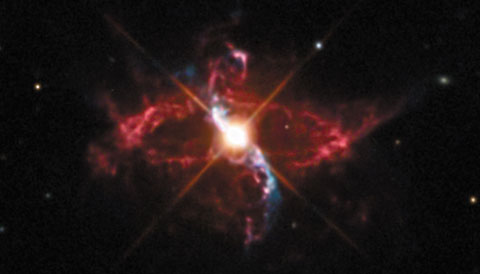 What looks like a normal pulsing red giant has a lot more going on around it. Its next episode of weirdness may begin soon, and variable-star observers are watching.

Nature unfolds in utter tranquility, living out the endless trajectories of physics and all its derivative laws with minute precision — though with complete disregard for the feelings of little egos like us who find ourselves embedded within it. “Happiness is functioning the way a being is organized to function,” wrote Robert A. Heinlein, and the stars are serene in their courses. But it’s easy to imagine that some stars would be pretty unhappy if they were people. The long-period variable R Aquarii, a red giant that’s now coming into nice telescopic view in the southeast in late evening, finds itself having to do its slow, pulsing heartbeat meditations next to the tiny, eruptive fury of a severely troubled mate who throws things. And yes, it’s all the red giant’s fault.

R Aquarii is, on first impression, a standard Mira-type variable, pulsing from about magnitude 6 to 11 and back every year and three weeks. In a telescope it shows the orange-red color of a late-M giant, especially when it’s in the faint part of its cycle. Which is where it’s heading now; its last maximum came in June, and minimum light is predicted for around December 11th.

But there’s a lot more going on here. Distantly orbiting the giant every 44 years is a hot, very faint white dwarf contributing weak spectral features of an O or B star to the dominant M star’s light. Stars that show such a combination-of-opposites spectrum are called symbiotic stars. R Aquarii is the closest of them at a distance of about 700 light-years. In a telescope the two points appear as one, but the white dwarf ventures far enough from the giant that the Very Large Array radio telescope was able to resolve the two at a separation of 0.055 arcsecond. Their orbit is thought to be highly elliptical.

Another source of light also adds to the spectrum: the faint nebula Cederblad 211. Although it dominates the photo at left, the nebula is extremely difficult or impossible to detect visually. It’s expanding and changing as we watch; all or much of it was apparently thrown off violently only about 250 years ago (as seen from Earth).

There’s more. The narrow, vertical S-shaped feature visible in the photo is strikingly bright in X-rays. Blobs of X-ray-hot material within it are moving outward at a tremendous 600 and 850 kilometers per second. The S results from a bipolar jet of hot material flying from the poles of an accretion disk around the white dwarf. The material that the dwarf is accreting surely comes from the giant, which like all Mira stars is shedding a thick wind.

For more than a century, visual variable-star observers have tracked some very unusual behavior for a Mira giant. At roughly 44-year intervals its annual fadings become less deep, the system’s overall color near minimum turns bluer — and the giant’s maxima turn fainter. The added blue light surely comes from the white dwarf and/or its accretion disk flaring up. But how could that suppress the red giant’s own, much greater luminosity at maximum?

One theory is that a large, semi-transparent dark cloud surrounds the white dwarf and its accretion disk as they orbit the giant; the cloud eclipses the giant for several years. If that’s the case, the next episode of giant-dimming should run from about 2018 to 2026. Variable-star observers are paying attention.

And why has the dwarf tended to brighten at around these same times? Perhaps because this is when, in its elliptical orbit, it passes closest to the giant and collects the heaviest dose of outflowing wind. That’s indeed when you would expect, statistically, the cloud-eclipses to be most likely to occur.

Much more spectacular things happen at longer intervals, as the nebula attests. The fresh hydrogen building up on the dwarf’s surface erupts at intervals as a nova explosion. The nebular ring, astronomers judge from its expansion rate, was blasted off by a nova outburst around 1773. A dimmer, outer nebula too faint to show on the facing page likely came from a nova explosion that Korean astronomers recorded at this location in 1073.

If these explosions on the white dwarf continue on schedule, R Aquarii should next go nova in the late 2400s. A system that’s telescopically faint now will then shine at perhaps 2nd magnitude — as obvious to the naked eye as Beta Ceti appears now, over there to the right of it. Swing your telescope there and try to imagine the change.