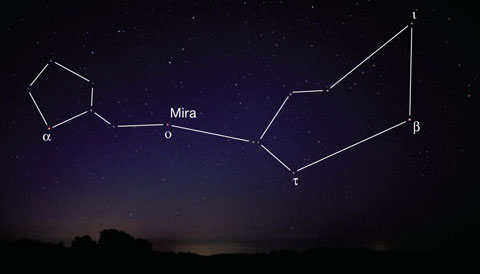 The joys of observing variable stars are predictably wonderful.

There is a star that ever seems to be
A source of wonder and amazement deep;
It is an orb of changing brilliancy.
But in recurring change doth constant keep.

Algol, thou shinest with a crimson light,
Waxing and waning mid the argent throng;
On thee we gaze, mysterious star of night,
To mark the wonders that to thee belong.
—Bela Chapin, Algol, 1882

In ages past, mankind thought the stars were immutable and unchanging. We now know that there are many ways in which this isn’t true, most plainly in the case of variable stars. Although no incontestable record supports this conjecture, some think that Algol may be the first star whose brightness variations were noticed. Its name means “the demon,” perhaps indicating something about the star seemed eerie. Unassailable evidence of Algol’s variability didn’t come until 1667, when the Italian astronomer Geminiano Montanari noticed that the star was fainter than normal. He continued to monitor the star for ten years, submitting his results to the Royal Astronomical Society of London.

Beta (β) Persei (aka Algol) is a triple star with a tight binary orbited by a more distant star. The inner pair is made up of a blue-white dwarf and a larger but dimmer yellow-orange subgiant. The binary’s orbit is nearly edge-on to our line of sight, favoring us with a deep eclipse when the cool star passes partly in front of its bright primary every 2.867 days. The entire event can be followed with the unaided eye. Between eclipses, the stellar duo shines at magnitude 2.1, then it plunges down to magnitude 3.3 and climbs back to normal over the course of 10 hours (see page 51 of the October issue for Algol’s minima for September and October). For the middle two hours of the eclipse, the pair lingers fairly close to minimum light, giving you an unhurried window for catching its act. Handy comparison stars include Gamma (γ) Andromedae at magnitude 2.1, Epsilon (ε) Persei at 2.9, and Epsilon Cassiopeia at 3.4.

Beta Lyrae is another eclipsing variable that can be enjoyed with the unaided eye. It’s composed of two blue stars, one a giant and the other a dwarf, snugged so close together that tidal forces stretch the components into ellipsoidal shapes. The distended giant is losing material to the dwarf by way of a dense accretion disk that obscures the smaller star. Massive stars use their fuel at a prodigious rate, and therefore evolve into giants sooner than low-mass stars. Yet in the Algol and Beta Lyrae pairs, the giant star is less massive by a considerable margin. In each case, the more evolved giant must have started its life as the more massive star of the pair, but then transferred much of its mass to its companion as the giant’s expanding outer layers overflowed into the gravitational grasp of its companion.

Beta Lyrae puts on a much different show. Beta’s elliptical stars and accretion disk conspire to lend the system a continuous change in brightness rather than discrete eclipses. The cycle from magnitude 3.3 to 4.4 and back spans a leisurely 12.941 days. Lowest light comes when the smaller star and its disk pass in front of the giant. When they pass behind the giant halfway between those minima, a secondary eclipse occurs, reaching magnitude 3.8. At maximum light, Beta is as bright as Gamma (γ) Lyrae, and at the deeper minimum it dips down to the magnitude of Eta (η) Lyrae. For a star that matches the secondary minimum, look to Iota (ι) Cygni in the northern wing of Cygnus, the Swan.

The relatively low-mass red stars known as Mira variables are another fascinating type to watch. Their outer layers expand and contract, as though the stars were drawing ponderous breaths taking anywhere from 80 to 1,000 days. Many undergo dramatic changes in brightness, and they appear reddest near minimum light. A striking example is Chi (χ) Cygni, with a period of 408 days and magnitude extremes of 3.3 to 14.2. The last two peaks were about 4th and 5th magnitude, and they can be as low as 6th magnitude.

Chi Cygni should be at maximum in October. If it follows its usual plan of alternating higher and lower peaks, this one should be brighter than last year’s 5th-magnitude peak. Look for Chi along the Swan’s neck, about a quarter of the way from Eta Cygni to Albireo (see the October 2016 issue, page 49, for charts with comparison stars). Is it visible to the naked eye? If not, you can track its rise and fall with binoculars or a telescope until the Sun carries evening twilight to that part of the sky.

Omicron (ο) Ceti, the prototype of the Miras, is currently making its way into our evening sky. Its common name, Mira, means “wonderful” and was bestowed by Johannes Hevelius in his 1662 Historiola Mirae Stellae, where he described the star’s remarkable variability. As with Algol, awareness of Mira’s changing intensity is rumored to have ancient origins, but solid credit goes to the German clergyman David Fabricius. While measuring Jupiter’s position in 1596, Fabricius noticed a 3rd-magnitude star where none was seen before. He watched it brighten and fade to invisibility over the course of two months. He wrote several tracts about the star and sent his observations to Tycho Brahe.

Mira should be bottoming out this September. Its climb to maximum takes only 38 percent of its 332-day cycle, so the star ought to beam at maximum light in January. Its peak can reach as high as 2nd magnitude, but typical maxima tip the scale at about 3.4. The star can be stalked with a small telescope as soon as it’s high enough in the sky, since even extreme minima only dip to magnitude 10.1 (S&T: Oct. 2016, p. 49).

Cepheid variables hold a place among the stars most valued by professional astronomers. They’re pulsating yellow giants that rhythmically expand and contract, but with breaths much shorter than those of Mira variables. A Cepheid’s luminosity and period are closely tied. Once the relationship was established and calibrated with an independently determined Cepheid distance, the distances to others could be calculated by observing their periods and comparing how bright they appear to how luminous they are. Because they are highly luminous, Cepheids can be used to establish distances to galaxies as much as 100 million light-years away.

Delta (δ) Cephei is the prototype of the classical Cepheid variables. It sits near the southernmost corner of the stick-figure house often drawn on sky charts to connect the constellation’s brightest stars. It varies from magnitude 3.5 to 4.4 and back over a period of 5.366 days, with the rise to maximum taking only 1.342 days (32 hours). However, if you follow the star with your unaided eye, the magnitude range is 3.4 to 4.2 because Delta’s light is combined with that of a 6.3-magnitude companion 41″ to the south. The duo separates into a pretty yellow and blue-white pair at low power through any telescope. Good comparison stars for following Delta are Iota Cephei at magnitude 3.5, Alpha (α) Lacertae at 3.8, Epsilon Cephei at 4.2, and Beta Lacertae at 4.4.

The variables described above are conveniently labeled on the all-sky chart at the center of this magazine. If you find that watching variable stars strikes a chord with you, you can delve more deeply with the charts and other resources of the American Association of Variable Star Observers (AAVSO) at aavso.org.

At first enigmatic, these changeable stars have now yielded some of the secrets behind their inconstant light to those who studied them across the years. But variable stars their mysteries still do keep. They slowly blink at us as if to say, “Watch me. Watch me and learn.” The variable star Chi Cygni has been at maximum nearly all of October at magnitude 4.4, and is
easy to still see with only the naked-eye from a dark observing site, and even in some moderately
light polluted areas.