The Vagaries of Crater "Tweens" 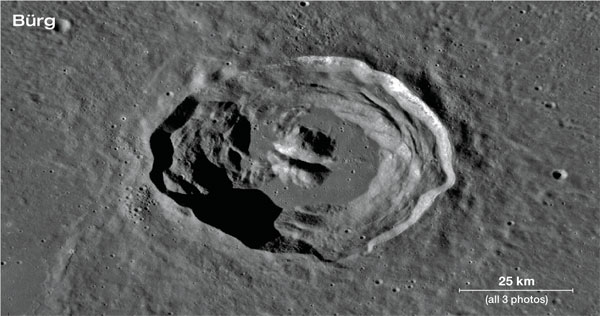 The morphology (shape and characteristics) of lunar craters becomes more complex once their diameters reach 25 to 40 km. Note how the inner walls have slumped in the examples in this post.
NASA / Lunar Reconnaissance Orbiter

Some lunar impacts have characteristics that make them neither "simple" nor "complex."

A biologist once said that God must have an inordinate fondness for beetles because he made so many of them. The Almighty must also have loved impact craters, for millions of them adorn our Moon, other moons, asteroids, solid planets, and probably the surfaces of rocky exoplanets. I like impact craters too, and the Moon’s eons-old landscape is my favorite venue for admiring their variations.

Over the last 60 to 70 years, the basic facts of impact-crater formation have become well established (S&T: Feb. 2017, p. 52). On the Moon, crater diameters range from micron-size zap pits to 1,000-km-wide basins, and their morphologies systematically change as their sizes climb. Lunar craters smaller than about 15 km across — such as 13-km Chladni — are commonly flat-floored bowls with smooth walls, looking like they’d been turned on a potter’s wheel.

For diameters larger than 15 km, these simple characteristics start to break down, literally. Craters’ outer walls begin to slump, and clumps of hills rise in their centers. Look at 25-km-wide Mösting, an extreme example of small-yet-complex craters. It has no flat floor, for the crater walls have collapsed nearly everywhere and sent piles of debris cascading toward the middle, inundating all but the top of its central peak. Some areas of collapse have undercut parts of the rim, creating alcoves that distort its circularity.

The walls and floors of ever-larger craters slowly become more orderly, as individual alcoves of collapses and slumps give way to stately terraces that sometimes circle the entire wall. Central hills become towering mountains. At their peak of perfection, as at Tycho, craters are magnificent sights.

As target rocks respond to increasing impact energy and the downward pull of lunar gravity, the resulting progression of crater morphology toward complexity is not smooth and uniform. Like children struggling to find their identities once they become “tweens,” and then transition from the teen years to adulthood, these depressions exhibit many variations due to local circumstances.

Nowhere are these transitional characteristics from disorderly (Mösting) to orderly (Tycho) morphology more evident — and varied — than they are for fresh craters with diameters of about 40 km. Here are some examples that reveal key details when viewed through amateur telescopes:

Glushko, on the highlands just west of southern Oceanus Procellarum, sits near the Moon’s western limb and is difficult for telescopic observers to see into. But Lunar Reconnaissance Orbiter images show that this young rayed crater displays two alcoves along its northeastern side, marking where the rim gave way and material slid downslope and partway across the floor. In fact, Glushko’s small central peak is totally surrounded by this cascade of debris from the slumped crater wall. Impact melt coats some of these flows, demonstrating that the wall collapsed as the crater formed, not years later.

A somewhat older crater, Herschel, is in the middle of the nearside, just north of Ptolemaeus, and thus much easier to see. Myriads of small cratering events have smoothed the impact melt that accumulated on its floor and erased its rays, but the basic structure is still prominent. The inner wall likewise has slid downslope — not as giant mounds of debris but apparently more continuously, resulting in a smooth contour. Perhaps the inward cascades were a long-term process rather than a jumble of events in rapid succession. More massive flows from the inner wall, probably dating from the crater’s formation, reached the central peak. Look about 3 km inward from the rim crest for a crisp ridge that parallels the rim all the way around; this an incipient terrace.

Bürg represents another step forward in the transition to a complex, Tycho-like crater. Its central mountain is bigger and comprises two massive peaks. Wreaths of mounded wall material step down from the rim scarp to the floor — not quite in terraces, yet more coherent than the simple slump blocks prevalent in smaller craters. Smooth material broadly covers much of the floor, which is well defined as a circle.

Aristarchus is the most famous 40-km-wide crater on the Moon. It is very young and has a bright ray system that can be traced from its floor, up its walls (seen as distinct light-hued bands), and across the surrounding mare. A pool of impact-generated melt defines a broad, relatively flat floor, with only a small central peak. Aristarchus displays the beginnings of three or four terraces around its circumference.

You might also observe the 40-km-wide craters Harpalus, Lansberg, and Cepheus, all marked on the image on the facing page, to see how they compare to Herschel, Aristarchus, and Bürg.

Although the examples I’ve cited are typical, some craters evolved differently depending on their location and the vicissitudes of time. Impact craters on maria often have lava-flooded floors that bury central peaks and debris mounds; Marius and Kopff are two good examples.

Over the course of billions of years, all craters’ walls get smoothed and lose detail; their floors become shallow and widen thanks to downward cascades from the walls and by ejecta dropped in from newly formed basins and nearby craters. Alpetragius is a peakless, smooth-walled, 40-km-wide crater that might once have looked like Aristarchus.

More heavily modified is Polybius, only 2 km deep with a wide flat floor. Compare its appearance to that of Aristarchus, which is about 3.2 km deep and has a smaller floor. Like many humans, the bottoms of craters widen with age.

As you examine craters larger than these, notice how features that characterize the full “Tycho” morphology — terraced walls, large central mountains, and a broad flat floor — become more commonplace. Three 60-km-wide craters worth examining are Erathosthenes, Bullialdus, and Zucchius. Each has incipient terraces giving way to full terraces, with mounds of wall-hugging debris on their floors. Their flat floors are larger and better-defined, and large central mountains are more prevalent. Think of them as the “young adults” of the Moon’s crater population.