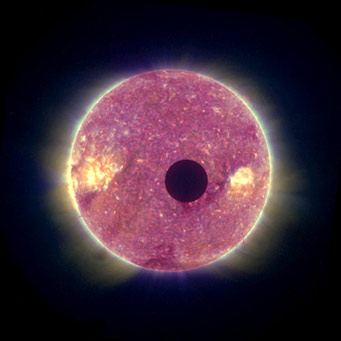 On February 25th the Moon crossed the Sun in an unearthly annular eclipse — one that can never be seen from Earth. These ultraviolet images were taken by one of NASA’s two STEREO solar observatories, which were launched last October and are now watching the Sun from widely separated positions. STEREO-B was 4.4 times farther from the Moon than Earth is, which is why the Moon appears so small. It is, however, nearly seven times wider than Venus will appear to us at its next solar transit, on June 6, 2012.

This lineup was no accident. Mission controllers planned it in order to measure the focus and scattered light in the STEREO imagers and to test the pointing of the onboard coronagraphs — and, we suspect, to get a picture for the history books. Click on the image to see a 2 MB QuickTime animation of the event.