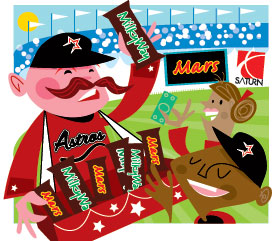 Astronomy is finding its way into more and more aspects of popular culture. Many cars have celestial names — for example, the Ford Taurus and Mitsubishi Eclipse. Tonight Show host Jay Leno often refers to astronomy in his on-the-street interviews. Even the comic strips in our daily newspapers occasionally touch on astronomical themes.

Sometimes astronomical references hit you over the head, such as when the American Dialect Society chose plutoed, meaning "demoted or devalued," as its Word of the Year for 2006. Other times they're more subtle. To find out where you rate on the cosmic culture continuum, take the following quiz about the appearance of astronomy in movies, music, novels, and advertising from recent decades.

1. In what 1987 movie does Darryl Hannah play an astronomer? (Hint: Steve Martin is enamored of her.)

2. What acclaimed American novelist has written a poem about neutrinos entitled "Cosmic Gall?" (Hint: The last name of the protagonist in several of his novels is Angstrom.)

4. Name the 1943 film in which William Powell plays an astronomer whose wife consults an astrologer for help with their marital problems.

5. What beer has the same name as a part of the Sun?

6. What 1927 musical features a football player who's failing astronomy and an astronomy professor who's in love with the football coach?

7. In a 1982 book, the title character is married to a woman astronomer who is forced by family circumstances to miss some long-awaited observing time on Palomar Mountain. Name the novel and the author.

8. What 1970s rock group recorded a song titled "Cygnus X-1," and what was the name of the album on which the song first appeared?

9. One of the best-known American astronomers of the 19th century wrote a science-fiction book in the year 1900. Name the astronomer and the novel's title.

10. It turns out that a 1975 made-for-TV movie about a famous (or infamous) UFO incident served as the inspiration for a famous UFO hoax that in 1993 was turned into another credulous movie. Name both films.

11. What Japanese car company has a star cluster's name?

12. What 1996 murder mystery has an astronomer as its amateur detective protagonist and takes place at a Northern California observatory?

13. The composer of the main theme music for the late Carl Sagan's TV series Cosmos has also written pieces of music called "Main Sequence," "Albedo 0.39," and "Sword of Orion." What's his name?

14. In what award-winning science-fiction novel written by a practicing scientist does astronomer Fred Hoyle appear as a character?

15. What well-known jazz composer has written and recorded a piece called "Quasars"?

16. What 1991 science-fiction novel about an astronomical event features a Hertzsprung-Russell diagram on page 48 of the paperback edition?

17. The two Voyager spacecraft each carry a record with the sights and sounds of Earth. What rock-and-roll song was included on it, thanks to the efforts of science writer Timothy Ferris? Give the title and artist.

18. What 1998 science-fiction novel about SETI, the search for extraterrestrial intelligence, discusses the Drake equation on page 79 of the paperback edition? Give the title and the Canadian author's name.

19. Between 1888 and 1896, a US state had a Celestial Railroad that ran over a 7-mile track and stopped at stations called Jupiter, Venus, and Mars. Which state was it? (Hint: It still has towns called Venus and Jupiter.)

20. What 20th-century opera concerns the life and work of Johannes Kepler (including his ideas that connected the movement of the planets with musical patterns), and who composed it?

How do you think you did? To find out, see the answers on the next page.

Former executive director of the Astronomical Society of the Pacific, Andrew Fraknoi teaches at Foothill College in Los Altos Hills, California, and serves as co-editor of Astronomy Education Review (aer.noao.edu). This article originally appeared in the June 2007 issue of Sky & Telescope.


Answers to the "Astronomy in Popular Culture" Quiz:

7. The Dean's December by Saul Bellow

9. Simon Newcomb, His Wisdom the Defender

10. The UFO Incident (about the Betty and Barney Hill Case) and Fire in the Sky (about the Travis Walton case)

11. Subaru, which means Pleiades in Japanese

13. Vangelis Papathanassious (he mainly goes by the name Vangelis)

20. Harmony of the World by Paul Hindemith

0-5 correct answers: Too many nights at the observatory — you need to get out more and mix with nonastronomers.

6-10: Good for you — you know when to put away your telescope and enjoy popular culture.

11-15: Very good — you must live in a cloudy climate to have so much time for popular culture!

19-20: Too good — you need to spend more time with your telescope and waste less time in front of the TV or plugged in to your MP3 player!

We invite you to use the Comments box below to suggest additional questions for possible future editions of the quiz. Thanks!

— The Editors of Sky & Telescope