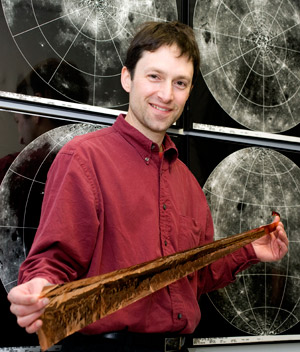 For five decades astronomers have used some of the world’s largest radio telescopes to search for signals from other civilizations. So far, our best equipment has not picked up any confirmed signals from extraterrestrials. In his cover story for the January 2012 issue of Sky & Telescope, radio astronomer Joseph Lazio of the Jet Propulsion Laboratory turns this problem on its head. Instead of discussing how we could detect them, he describes various methods by which they could detect us.

As Dr. Lazio explains early in the article, this question can be divided into two parts. The first is how alien astronomers could find Earth and recognize it as a life-bearing planet. It turns out they would need technology only a few decades beyond what we currently possess. The second and more interesting question is how they could detect human civilization. Dr. Lazio describes various methods ranging from particle beams to nuclear blasts in outer space, and why making contact easy for them could prove rather difficult for us.

S&T Editor in Chief Robert Naeye interviewed Dr. Lazio on a wide range of topics including extraterrestrial civilizations, interstellar communication, and other issues related to SETI. Because the discussion is long (18 minutes), we have divided it into two parts.

Click here to listen to the first part of Dr. Lazio's interview.

Click here to listen to the second part of Dr. Lazio's interview.