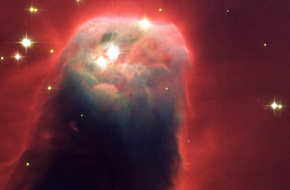 Soon after it was installed on Hubble, the ACS captured this image of the Cone Nebula, a stellar nursery shrouded in hydrogen gas.

Like other large spiral galaxies, our Milky Way shines with the light of hundreds of billions of stars. It contains giant gas clouds, perhaps a trillion or more planets, and a supermassive black hole at its core. That’s a lot of stuff. But to the befuddlement of astronomers, everything in our galaxy they can see with their most powerful telescopes constitutes just a small fraction of the Milky Way’s gravitating mass. Most of that mass is in some kind of dark form, called “dark matter” as an expression of our ignorance. The nature of dark matter remains one of the most profound unsolved mysteries in science.

In the April 2009 issue of Sky & Telescope, Dutch science writer Govert Schilling reports on recent detections of high-energy particles from deep space. According to some theories, these detections might be signals from particles of dark matter coming together and annihilating one another. This month we feature two podcast interviews with leading scientists in the field, conducted by S&T editor Robert Naeye.

In one interview, we are joined by Louisiana State University physicists John Wefel and Gregory Guzik, members of the ATIC team, whose balloon flights over Antarctica might have registered the whispers of dark-matter annihilations. Click here to download the 6-megabyte, 16-minute podcast.

We also have an interview with physicist Gordon Kane of the University of Michigan, a leading proponent of a theory known as supersymmetry, whose predictions about dark matter might explain the observations of ATIC and the European PAMELA satellite. Click here to download the 5-megabyte, 15-minute podcast.