In the November 2013 issue of S&T, Joe Rao redirects Comet ISON speculation to answer a different question: just how often do showstopper comets grace our skies? His answer might surprise you.

Rao looks back over all the comets of the past century, calling out examples of showstoppers, showpieces, and garden-variety comets.

Readers predicted Comet ISON's appearance in December based on Rao's descriptions below. Now that polling is complete, here are the results: 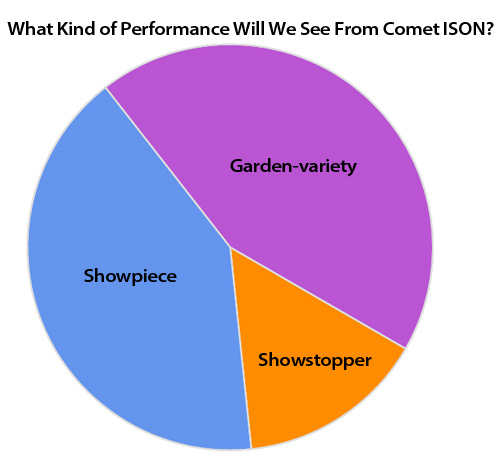 Readers responded to our survey with some optimism and a healthy dose of caution.

Great January Comet
January 13–27, 1910
This comet was visible in daylight on the 17th as a snowy-white object with a tail 1° long. It quickly moved northward and became a stupendous object for the Northern Hemisphere. By January 30th, a sweeping tail stretched out to about 50° in length.

Halley
May 6–27, 1910
After perihelion, it evolved into an increasingly large and imposing object in the eastern morning sky. On the morning of May 19th, after the Moon had set, the tail was seen to stretch for 120° — two-thirds of the way across the sky!

Ikeya-Seki
October 15–31, 1965
This showstopper was a member of the Kreutz family of sun-grazing comets. It was the brightest comet of the 20th century, visible in full daylight within a few degrees of the Sun. Japanese observers said it appeared “10 times brighter than the full Moon.” During the last week of October a long twisted tail, resembling a wispy searchlight beam above the eastern horizon, stretched for at least 25°. The nucleus split into three pieces.

West
February 18–March 8, 1976
At perihelion on February 25th, this comet could be glimpsed in the late-afternoon sky with the naked eye. Moving into the morning sky, a spectacular tail developed, boasting no less than five components by March 8th, the longest being a dust tail measuring 30° in length. It was described as “a fantastic fountain of light” in the May 1976 S&T. A disruption of the nucleus resulted in four fragments.

Hyakutake
March 19–April 4, 1996
It came to within 0.1018 a.u. of Earth on March 25th, the intrinsically brightest comet to pass so close to Earth since 1556. It could be observed almost directly overhead during the predawn hours, shining as bright as zero magnitude and against a dark sky sporting a tail that approached 100° in length. John Bortle calls it “One of the grandest comets of the millennium!”

McNaught
January 6–25, 2007
This comet reached its peak brilliance on January 13th and 14th, when many could easily spot it in broad daylight just by blocking the Sun with a hand. The comet then moved into the evening skies of the Southern Hemisphere, unfurling a gigantic fan-like tail containing a number of luminous bands, eventually reaching a maximum length of 35° on the 23rd.

Viscara
Apr. 12–May 9, 1901
Visible only from the Southern Hemisphere, at perihelion on April 24th, it burned a deep yellow and could be followed telescopically after sunrise. By May 3rd, two tails could be seen: a faint 30° gas tail and a brighter 10° dust tail which appeared noticeably curved.

Great Southern Comet
Dec. 7–12, 1947
After passing within 0.11 a.u. of the Sun on Dec. 4th, this object suddenly appeared in the evening skies of the Southern Hemisphere a few days later; its head appeared distinctly orange and trailed a 20 to 30° tail. It quickly faded and was all but gone to the naked eye by Christmas.

Eclipse Comet
Nov. 1–12, 1948
It surprised astronomers by suddenly appearing during a total solar eclipse on Nov. 1. It had already passed perihelion on Oct. 27th, and was only 2° from the Sun when it was first sighted during the 45-second totality from Nairobi, Kenya. A 20° to 30° straight tail developed in the following days. Was best seen from the Southern Hemisphere and tropics.

Arend-Roland
Apr. 2–25, 1957
Visible only from the Southern Hemisphere during the first half of April; thereafter only from the Northern Hemisphere. After perihelion on April 8th, this comet approached Earth as it continued to develop. During the final week of April, it displayed a 25 to 30° tail as well as an extraordinary sunward pointing appendage (an anti-tail) extending 15°.

Seki-Lines
Mar. 18–Apr. 11, 1962
Initially visible from the Southern Hemisphere, the comet brightened rapidly as it approached perihelion on April 1st. It then emerged into the Northern Hemisphere skies accompanied by a bright 15 to 20° tail with a highly complex structure. A striking object low in the western evening twilight, it soon faded rapidly.

Bennett
Mar. 15–Apr. 10, 1970
Discovered in the far-southern sky, this comet moved northward and became a stunning object for the Northern Hemisphere, appearing well up in the predawn eastern sky. Exhibited extraordinary spiraling jets of bright material being ejected from the nucleus as well as two tails, the longest spanning 20°.

Hale-Bopp
Feb. 15–May 15, 1997
Visible with the unaided eye from July 1996 thru Oct. 1997, an all-time record. From Mar. 5th to Apr. 5th, it could be observed both in the northeast sky at dawn and the northwest sky at dusk. Perihelion was Apr. 1st and during the next couple of weeks evening skywatchers could see a prominent dust tail and a fainter gas tail, each 15 to 20° long. According to a survey by Maricopa Research, the comet was seen by 81% of American adults; more than the Super Bowl.

Lovejoy
Dec. 16–21, 2011
A Kreutz sungrazer, this comet passed within 0.005584 a.u. of the Sun. Immediately after perihelion, the comet faded rapidly, but during the next two weeks it developed a bright and nearly 40°-long tail that extended almost straight up from the southeast horizon before sunrise as seen from the Southern Hemisphere. The comet head had all but vanished by year’s end and the tail disappeared too during the first week of 2012.

Mellish
April 4–16, 1917
Primarily a Southern Hemisphere object; visual estimates of the tail length went as high as 20°. A periodic comet, it might return possibly in 2061, the same year as Halley.

Skjellerup-Maristany
Nov. 29–Dec. 20, 1927
Visible as an intensely brilliant yellow object at perihelion just 2° from the Sun in the daytime, but after the 20th it became very difficult to observe because it faded rapidly and was mired deep in bright twilight. “A case of a truly spectacular comet seen under virtually the worse possible viewing circumstances” (Bortle).

Mrkos
July 29–Aug. 9, 1957
Visible in both the morning and evening skies for several days. Displayed two tails, the brighter one strikingly curved and 15° long.

Kohoutek
Dec. 23–Jan. 2, 1973–74
Heavily billed as potentially “The Comet of the Century,” it indeed became a spectacular object right after perihelion but only as seen from Skylab III. “A very elegant and impressive sight” (astronaut Edward G. Gibson). It appeared bright yellow with an unusual sunward spike. But then the comet suddenly dimmed rapidly for ground-based observers. Visually, the dust tail only extended out to 10° to 15°, and it ended up being a huge disappointment.

Pan-STARRS
Mar. 4–16, 2013
Difficult for many to see due to a combination of strong evening twilight while also remaining very low to the western horizon. Visually, very disappointing. “Rarely is such a bright comet so hard to see.” (S&T, July 2013).