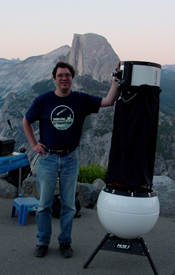 Robert Naeye was editor in chief of Sky & Telescope magazine and SkyandTelescope.com from 2008 to 2014.

It was Bob’s third stint at S&T. He served as an editorial intern during the summer and autumn of 1991, when he was finishing his master’s degree in science journalism from Boston University. Robert returned to S&T in November 2003, and worked as a senior editor until January 2007. During that period, he wrote, edited, and commissioned science articles for the magazine and website, and produced the magazine’s popular News Note section. He also wrote several articles about amateurs who are contributing to scientific research.

Besides his S&T experience, Bob worked as a researcher/reporter at Discover magazine from 1992 to 1995, and as an associate then senior editor at Astronomy magazine from 1995 to 2000. He served as editor in chief of Mercury magazine from 2000 to 2003. Mercury is the membership magazine of the Astronomical Society of the Pacific. From February 2007 to May 2008, Bob was the senior science writer in the Astrophysics Science Division at NASA’s Goddard Space Flight Center in Greenbelt, Maryland.

In 2002, the Astronomical Association of Northern California honored him with its Professional Astronomer of the Year Award, mainly for his education and outreach activities, and his participation in sidewalk astronomy and public stargazing events. That same year, he won the David N. Schramm Award for Science Journalism from the American Astronomical Society’s High Energy Astrophysics Division. He has also won several awards from star parties and amateur astronomy clubs for his public speaking.

Bob has authored two books and contributed to two others. His 1997 book Through the Eyes of Hubble: The Birth, Life, and Violent Death of Stars was published by Kalmbach. His 2000 book Signals from Space: The Chandra X-ray Observatory was co-published by Turnstone and the Harvard-Smithsonian Center for Astrophysics. He helped write two chapters for the book Star Wars: Where Science Meets Imagination, co-published by National Geographic and the Boston Museum of Science. And he contributed a chapter to a book celebrating NASA’s 50th Anniversary, published by Faircount.

In case you’re wondering, his family name is pronounced NOY-uh (think “paranoia”), which originates in the Flanders region of The Netherlands.

Click here to watch a video interview with Bob Naeye.