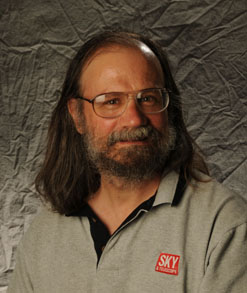 Tony Flanders has been fascinated by astronomy longer than he can remember, but he only started telescopic observing late in life, in 1997. That's when he bought a 70-mm refractor and set out to observe all the Messier objects. His first sightings were from his home in Cambridge, MA, but he moved to progressively darker locations as he worked his way through the faintest galaxies.

Tony later reobserved the Messier list (and the Herschel 400) with a 7-inch Dob. The experienced morphed into a guide to observing the Messier objects from cities and suburbs that was summarized in the April 2002 issue of Sky & Telescope. You can read a longer version on his personal website.

Tony has always had a wide array of interests. He started college intending to major in folklore and mythology, then switched to mathematics, and ended up graduating in English in 1975. But like most people in his generation who were technically minded but unfocused, he always found it easiest to earn his living as a computer programmer. Computers and astronomy both run in Tony's blood. His grandfather Donald was one of the world's first computer programmers, and his great-uncles Ralph and Ernest were charter members of Stellafane.

In 2003, Sky & Telescope encouraged Tony to apply for an opening as Associate Editor. He jumped at the opportunity, and was hired later that year. He is amazed to find work where all of his knowledge is applicable, from archaeology to outdoor survival to mathematics to literature.

Tony's greatest joys are his family, being active outdoors day and night, and writing. He credits his literary skills primarily to his mother and his 9th-grade English teacher, John Taylor Gatto.

Click here to watch a video interview with Tony Flanders.

Click here for more information on the Sky & Telescope staff.