Last March 2nd I experienced first light with a new telescope. Maintaining my tradition using Jupiter as my first-light object, I waited until well into dawn so that the giant planet could climb into the eastern sky and I could officially inaugurate the new instrument. But this time it wasn’t just one telescope; it was two. I was using my new 10-inch binocular telescope, the RB-10, made by JMI Telescopes. 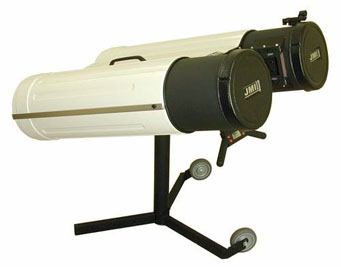 The RB-10 â€œReverse Binocularâ€ made by JMI Telescopes comprises a pair of 10-inch Newtonian reflectors on an altazimuth mount with easy-to-use electronic controls that keep each telescope precisely pointed at the same object.

Using a binocular telescope is the natural extension of the way most of us started out observing the heavens. My first look at the sky through an optical instrument was with my parents’ 7 x 50 binoculars during the summer of 1960. They gave me an excellent start.

From the small binoculars that introduce most of us to the night sky to the Large Binocular Telescope (LBT) that towers atop Arizona’s Mount Graham, twin-scope systems are powerful tools for astronomy. The LBT sports a pair of 8.4-meter (331-inch) primary mirrors supported by 580 metric tons of telescope.

In between the world-class LBT and the small binoculars that can carry us from baseball games to the stars, Jim Burr of JMI Telescopes has developed a line of sophisticated binocular telescopes ranging in size from 6- to 16-inch aperture. Each consists of two complete telescopes mounted together. All the adjustments needed to keep them precisely aimed and focused on the same object are made while you look through the eyepieces.

This view from the business end of the RB-10 shows the pair of eyepieces mounted between the telescopes. As such, observers look downward while the scopes peer upward at the heavens over their shoulders.

I quickly learned that observing with the RB-10, which I nicknamed Zubenelgenubi (view correction) after a famous double star in Libra, is different from regular observing in some remarkable ways. The most important one is that you face away from the object you’re looking at. You also look down (as if you were sitting at a desk reading a book), so right off the bat you’ve in a comfortable position using this instrument. Control buttons located underneath the eyepieces let you electronically adjust the interocular distance (space between the eyepieces), and the focus.

Starizona’s Dean Koenig helped me get the RB-10 set up. When he delivered it to my house, I thought we’d need a bulldozer to carry it from his van to the observatory. But as we gradually unpacked the box the main pieces were light enough for Dean to carry by himself. We had the RB-10 ready for observing in less than two hours.

While Burr recommends medium- to high-power eyepieces for the RB-10, I like low powers for comet hunting. I selected a pair of 25-mm Plossls that yield a field of view about three-quarters of a degree across and make comet searching eminently comfortable with this instrument. The RB-10 has also given me hours of fun observing solar system objects. The Moon hangs in space, awaiting its next spacecraft visit. Jupiter is a special joy. And when an Earth-orbiting satellite tracked through my field one time, it really appeared to hang below the canopy of background stars.

While my chance of making more visual comet discoveries are very slim these days, I always say that it’s the search that’s the fun part. With this new pair of 10-inch telescopes, the search will be even more fun than before.

Yeah David when you are done with the JMI Telescopes RB-10'S send them over my way! 🙂

I would love to take a peek through them!

I know my 7x35,10x50 and latest new binoculars 16x50 are in use just about every night! Thanks for the binocular story. And keep up the good work!

send them to me!

I heard the quality is 'spotty'. But that is second hand and hearsay. Nonetheless was your's 'cherry picked' by Dean or Jim??

I also heard they can be a bit 'fiddly'. Is that you experience?

It would be really handy if, as part of these reviews, you had a URL linking to JMI's page for this scope.

My initial reaction is that such a binocular telescope is a silly way to waste money. So perhaps someone can explain why this is more than a curiosity.

My problem: Given the distance of astronomical objects, there can be no stereo viewing effect. Thus the only advantage that I can see is that both eyes can view the same scene simultaneously. However, that effect could also be accomplished with a single objective and optics that split the image into separate images for each eye. The only downside there is that it would reduce the amount of light. That could be compensated for by going to a larger single mirror, which I figure would be cheaper and simpler than the separate mirror solution. (The splitting solution is also retrofittable to an existing telescope.) So what am I missing?

(Used terestrially, a stereo effect could be experienced; but, for the sort of subject matter for which that would be relevant, the magnification is probably unnecessarily high.)

Hey David! It's nine years later but your criticism didn't come with an expiration date. Your idea of a single larger mirror runs into the nonlinear cost increase with increasing mirror size. And as you point out, a binocular telescope is not intended to give you parallax. Rather, by filling both of a person's retinas with the maximum amount of starlight available (at a given price point), binocular telescope users attest to a significantly improved observational experience.

I know that the LBT has a much higher resolving power than would be suggested by its primary mirror, because the images are combined, which gives it the resolving power of a mirror twice as large (i.e. 16.8 meters). Does that work for visual observation as well? And if it does, would the resolving power actually be higher than 20 inches if it measures from the outer edge of one mirror, across the gap where the eyepieces are, and to the edge of the other mirror?