A Year That Will Shine 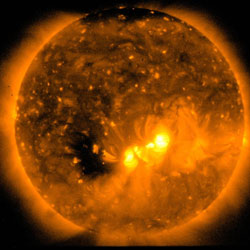 This false-color view of the Sun was taken by the Hinode satellite's X-Ray Telescope (XRT).

A good friend who I often share pizza, ice cream, and Ben Stiller movies with wrote a well-crafted e-mail to me over the weekend commenting on my note about the International Year of Astronomy 2009. She explained that I should have noted that this year is already a United Nations–sanctioned year of scientific cooperation of astronomical interest, namely the International Heliophysical Year, which also marks 50 years since the International Geophysical Year (IGY). So I replied that she was absolutely right, I should have known — and so should all of you now that it's underway.

Among the newest tools for solar study is the Hinode satellite, launched last September 23rd. It joins the ranks of other past and present solar observatories that have produced amazing images of our star, including Yohkoh, SOHO (they have a new website design!), and TRACE.

If all the scientific events for the IHY are a bit technical for you, then look over what's happening as part of NASA's Sun-Earth Day celebration. It's an annual outreach program that, despite its name, lasts longer than one day.