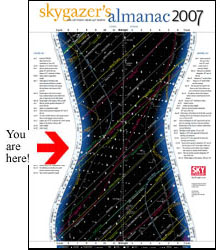 Sunset will be getting steadily earlier for the next four months before plateauing in early November.

It's now a month past the summer solstice, and sunset is arriving noticeably earlier every day. Even more important to me, a natural early riser, sunrise is now fully 20 minutes later than it was in mid-June.

I'll shed no tears for the long days of June and July. Even before I was a stargazer, I liked a mixture of day and night. I find it creepy when it's always light during my waking hours, just as I find it unpleasant in midwinter, when the Sun sets before I leave work. But I will miss the long, lazy summer twilight. That magical time between full day and night, when the stars come out in the evening or disappear in the morning, is much longer around the summer solstice than at any other time of year. That's true in my part of the world, anyway. To a large extent, twilight is a phenomenon of high latitudes — a subject that I'll return to soon.

July's window of moonless observing is almost over, but now I have August's to look forward to. And weather permitting, that's one of my favorite new Moons of the year. The summer Milky Way is still showing at its best, and the nights are finally long enough to appreciate the Milky Way properly. And to add to the fun, the Perseid meteor shower peaks at the best time of the Moon cycle.

High latitudes, you say. But how high is high?

You're in Boston at 42.3 deg N, is that right? I live within 3 miles of 55 deg N, - that's a bit further north than Edmonton (try eg Athabasca), thankfully not as far north as Alaska or most of Scandinavia though. Lovely light evenings here, but little night sky from May to August inclusive, almost none at all in June and early July. And besides the twilight, this latitude makes Scorpius and Sagittarius quite low and hard to see, especially on summer evenings.

Be interested to read your comments on twilight and high latitudes.