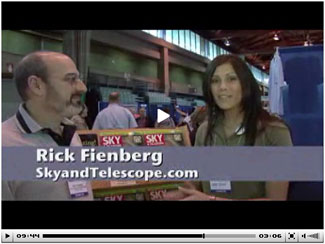 On Saturday, I went to the Northeast Astronomy Forum & Telescope Show (NEAF) in Suffern, New York. It's a two-day event, but I drove out just for the afternoon. I didn't have anything on my want-to-buy list, but I like looking around, seeing new products, and seeing who's there. I always like talking to the software developers.

There were a few people that I know were there that I didn't manage to see (I never saw Sean Walker). Two other people I missed were Steve Bevan and Casey Dee from Starlight Learning, who have started producing short, educational space-related videos. Bevan has created AstroShorts.com, a video-sharing site that's a space-themed version of YouTube. Some of the initial batch of the site's videos are from NASA, but users are encouraged to submit their own, just like YouTube. If you think you can aid other amateur astronomers with your video skills, here's your opportunity to make a tutorial or highlight your homemade scope.

Bevan and Dee's primary contributions are their "News in Space" segments. The latest videos feature reports from NEAF. The first one appeared this morning and three more will be posted soon. The first features Dee chatting with Craig Weatherwax of Oceanside Photo & Telescope, Al "Actual Size" Nagler of Tele Vue, Normand Fullum of Telescopes Normand Fullum, Terence Dickinson of SkyNews, and S&T's own Rick Fienberg. So if you missed the show, these videos will fill you in, and perhaps inspire you to go next year.