As August winds to a close, I've been reading reports from stargazers at far northern latitudes. They usually start something like this: "Here in southern Alaska, we just had the first half hour of genuine darkness for four months." Or: "In Finland it won't get dark for another two weeks, but that didn't prevent me from observing such-and-such." 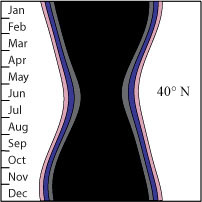 Civil twilight is shown in pink, nautical twilight in dark blue, and astronomical twilight as gray. The horizontal axis represents a full 24 hours, and everything that's not shaded is daylight.

Most of the year, astronomical twilight doesn't bother me. It lasts about a half hour -- just long enough to get all my charts organized, become dark adapted, and work out some preliminary star-hops. But around midsummer night, at the latitude of Boston (42.5°), astronomical twilight stretches out to a seemingly interminable hour. 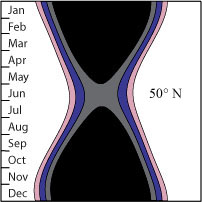 Things are dramatically worse at 50°, the latitude of Winnipeg, Canada, or the southernmost tip of England. Here, astronomical twilight swells until it consumes much of the night from May through mid-August. It's sobering to think how much the Herschels accomplished despite the fact that at their location, the sky never gets fully dark for all the time that the Sagittarius Milky Way is reasonably high off the horizon.

I don't think I'm being narrowminded when I speak of astronomical twilight as a bad thing, by the way. Astronomical twilight is a great nuisance for astronomers, but it's far too dark for normal civilian activities. And it's not especially romantic, either. All color has gone from the sky, leaving just a dull glow above the spot where the Sun set. 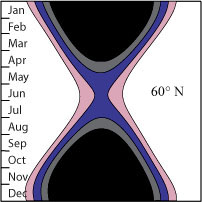 In Seward (Alaska), Oslo (Norway), or St. Petersburg (Russia), at latitude 60° N, deep-sky astronomy grinds to a complete halt for several months. Here, on midsummer night, the sky doesn't even pretend to get dark. Just an exceedingly long sunset merging imperceptibly into an equally long sunrise.

It's interesting to think what's going on during astronomical twilight. When the sun is 12° below the horizon, that means that the closest spot on Earth that's still bathed in direct sunlight is more than 800 miles away. All the light that you see — and it's still fairly bright in the west — has struggled through those 800 miles of air, and around the curve of Earth's surface. It takes fully 1200 miles of air to fully extinguish the Sun's light and end astronomical twilight!

This also makes it clear that it's hopeless to give a precise formula for how dark the sky is at any given time after sunset. Suppose there's a big band of thunderclouds 500 miles to the west of you. That would probably block 90% of the sunlight, allowing the sky to become fully dark when the Sun was only 15° below the horizon instead of 18°. 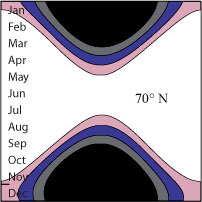 How about the true Arctic, the land of the midnight Sun? Most of the people there live not far north of the Arctic Circle. Latitude 70° N just clips the northern tips of Alaska and Norway. I tend to think of this as a land of perpetual cold and dark, but one look at the diagram at right makes it clear just how wrong that is. Even on midwinter night, the time of full darkness is barely longer than it is in Boston! Instead, the three twilight bands have swelled until they occupy a huge chunk of all the hours in the year. In the Arctic, when it's not daylight, it's probably twilight.