Blinded by the Light

When I was hiking a week ago, I had a couple of interesting revelations about using flashlights at night. 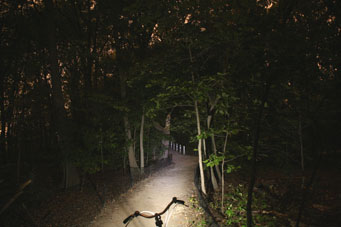 A flashlight creates a capsule of light around you — at the cost of hiding the wider world.

Both happened in the pre-dawn hours. The first revelation came second chronologically, on Sunday morning. It was mostly overcast, so I wasn't motivated to spend lots of time looking at the sky. So I went down to the stream early to fetch water to boil for my morning coffee. The path is quite steep and fairly long, so I was using my headlamp. And I mused — not for the first time — how a flashlight cuts you off from the world around you. When you're in the woods on a moonless night, you can't see much without a flashlight, but you can see equally well (or poorly) in every direction. The flashlight creates a bubble of light around you. Inside that bubble, everything is clear. Outside, it's totally black.

Many sites on the web review flashlights, and it's a little startling how much they assume that brighter flashlights are always better. In the backcountry that's simply not true. The last thing you want to do is to blow your dark adaptation completely. 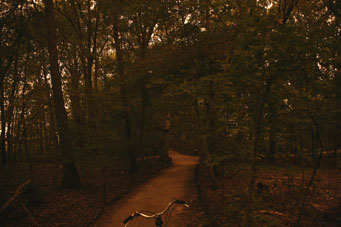 Without a flashlight, you see equally well — or poorly — in all directions. This photograph and the one above were taken in a city park, lit by skyglow and the nearly full Moon filtering through a moderate overcast.

So is the faintest possible flashlight best, then? No, that's not true either — as my experience the previous morning had shown. On Saturday morning, when it was clear, I did want to see the sky as much as possible, and didn't want to destroy my dark adaptation. So I climbed down from the boulder where I was perched using just my red flashlight.

Frankly, it was pretty scary. The highest point of the boulder is perhaps 10 feet off the ground — not a long enough drop to kill, but enough to be quite unpleasant. On the side I climbed up, there was a rock pile reaching almost to the top — but not quite within reach of my foot as I lowered myself off the boulder. I knew quite well that there was solid ground just inches below my foot, but the red flashlight wasn't bright enough to illuminate it. So I had to trust my memory, and jump blind. Needless to say, it worked. But I'm not sure that preserving my dark adaptation was worth the brief moment of terror.

What does this have to do with astronomy? I'll get to that in my next blog.

Hi Tony, I carry 3 Flash lights, one is the NINE GLOBE Halogen White & very bright one, this one I hardly ever use but you never know, do you. The Second is the equally bright white Halogen with ONE Globe. This one has been hand coloured using a RED TEXTRA PEN and consequenty has ended up perfect for adjusting my scope and other readings such as the Planisphere. Finally, I have a HYBRID, this one has a WHITE HALOGEN OF LOW POWER for pointing ahead and it is not TOO BRIGHT. The control is multi function and the 2nd position turns off the White Halogen and the torch made of opaque plastic becomes a Safety Stick of pale lime green. Finally, the last setting makes the Flash Light flash intermittently as a "BEACON" or such so you can use it for messaging if you need to. Between the Red Halogen and this last one, I use the last one the most. Clear Skies Tony.

In books about meditation, I have read the analogy that our usual awareness is like a flashlight -- we're very focused on one thing and its immediate surroundings, but blind to the larger context. A mindful state is more like seeing the world by the light of the full moon -- you get the big picture. You can focus intently on one thing without being blinded to the rest of the world. [Paragraph break] When I'm camping or at a star party, I enjoy messing with people who are moving around by flashlight. I'll stand quietly until they're a few feet away from me, quietly say "boo," and shield my eyes from their reflexively raised flashlight. Once they're over their startle reaction, I ask them to turn off their flashlight, let their eyes adapt to the dark, and notice that they can actually see much more with dark vision than with a flashlight. [Pagragraph break] And yes, Tony, I would use a white flashlight for climbing down from a ten-foot boulder! Everything has its proper use!

Iâm always convinced that a bear is waiting just outside of my flashlightâs cone of light. One thing I *have* learned: a red flashlight does a very poor job of showing a skunkâs white stripe! One night, while standing outside my house looking for meteors I keep hearing something rustling the grass near my feet. The red flashlight showed nothing. It was about 10 minutes before I finally realized that the source of the rustling was a skunk digging up grubs.