Bye for a While

I normally try to post at least one item per week in my blog, but I missed last week. That's because I've been frantically busy preparing for a four-week vacation. 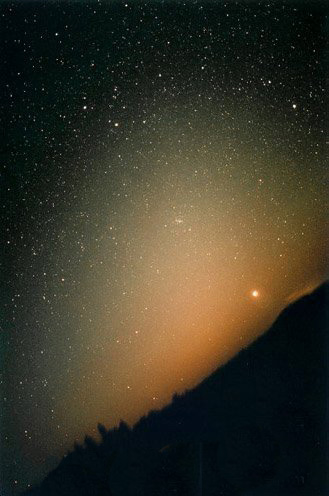 At latitude 40°, the zodiacal light tends to hug the horizon. Nearer the equator, it reaches high in the sky.

I'm off to India. Astronomy's not one of my primary goals, but every place on Earth and every human endeavor has some relation to astronomy, the oldest and most universal of all the sciences (except maybe medicine). So whenever and wherever I go, my vocation and avocation travel with me.

Moving 15° farther south potentially opens up new celestial vistas. But the great southern objects in autumn's evening sky are all galaxies, which require a big telescope to do them justice — and I'm not about to schlep a scope along on this trip. Maybe I'll find out how many of the Fornax galaxies are visible through 10×30 binoculars.

My primary observational goals are to show my wife two things she's never seen: Canopus, the sky's second-brightest star, and the zodiacal light. Eta Carinae will also be poking above the horizon just before dawn, but it will be so low that I doubt we'll get a decent view.

Astronomy is also tremendously important in India's cultural heritage. If you think people are crazy about astrology in the West, you should see India! But that's a topic for a whole 'nother article ... 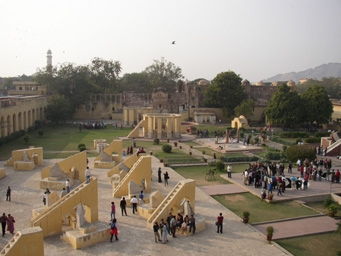 On a more sober note, it was India that gave us the mathematical tools (via the Arabs) that were required to make the jump to modern science. And India is home to what are perhaps the most architecturally striking astronomical observatories in the world: the five Jantar Mantars constructed by Maharajah Jai Singh II (1688-1743).

What intrigues me most about these observatories is how archaic they were when they were built. Though Jai Singh was a Hindu, his observatories are clearly descended from Islamic astronomical tradition. They very much resemble the observatory in Samarkand built by Ulugh Beg, another (far greater) astronomer-king. But whereas Ulugh Beg's observatory was cutting-edge when it was built in the 15th century, telescopes rendered naked-eye observatories obsolete a century before Jai Singh built his. And Jai Singh, a highly cultured man, must surely have known that.

So perhaps the Jantar Mantars were built more for publicity than for practical use. I suppose we'll never know.

you have a wonderful vacation

Hi Tony,
Lots of astronomy in India, alright...but as you said, "Astronomy's not one of my primary goals" on this trip. Traveling to India is a major undertaking, and (since you brought it up) why are you going there?

Hi Tony, have a wonderfultrip. I went there with my wife few months ago and wonder around the country. There is a gallery of India on my photography website which might of your interest, including Jantar Mantar.
http://www.dreamview.net/dv/new/browse.asp?page=1&Cat=Gallery3

Babak, I love your photos -- especially the night shot with bicycle, cow, and autorickshaw. I'll have to try shooting some night scenes in India myself.

In response to Jim's question, I have more reasons to visit India than I can possibly list. The bottom line is that I love the country. Not only is it endlessly fascinating, but it's also immensely pleasant, beautiful, and relaxing.

* My daughter spent the first year of her life in an India (in a wonderful orphanage) before we adopted her.
* I have several friends and relatives there.
* I love mountains, and India's mountains are second to none.
* Great food.

What do you mean, "schlep a scope"??? What about those suitcase- or carry-on- sized wonders (small refractors) and a standard heavy-duty photo tripod!

Have a great trip.