A while I ago, I mentioned the fact that the Hindu festival of Divali always takes place at new Moon. That's particularly appropriate in this case, because Divali is celebrated by lighting candles so that the hero Ram can find his way home after a 14-year exile in the wilderness. And why would Ram need candles if the Moon were up? 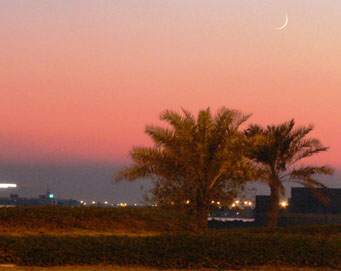 A thin crescent Moon over Manama, Bahrain, marks the beginning of Ramadan in September, 2006.

This put me in mind of the fact that all Hindu, Jewish, and Islamic holidays are necessarily synchronized with the Moon, because all three religions use calendars where months are strictly tied to the phases of the Moon. This year in particular, that's driven home by the fact that both Rosh Hashanah (the Jewish New Year) and the holy Moslem month of Ramadan, start at sundown tonight, on the day after a new Moon.

Speaking as a stargazer, our own calendar is quite annoying. The synodic month (from new Moon to new Moon) is 29.53 days, but our months average 30.44 days. So the Moon phases fall behind about 11 days each year. What a pain! Wouldn't it be handy if you knew that the Moon would always be new on the 1st, instead of having to look it up all the time?

In modern society, hardly anybody except for astronomers pays attention to the Moon, except maybe for aesthetic reasons. But before electric lights, you couldn't ignore it. At full Moon, you could move freely all night long. At new Moon, you had to grope your way. It's pretty remarkable that Julius Caesar decided to "regularize" the calendar by cutting months adrift from the Moon.

Before Caesar, Romans used the same sensible calendar as the Jews (and Hindus): the lunisolar calendar. Months stayed in sync with Moon phases, years stayed in sync with seasons, and a 13th month was added every 3 years or so to keep the months from slipping with respect to the year. Presumably, the Romans decided that the administrative hassles of having a variable number of months per year outweighed the benefits of having meaningful months. Romans were big on regularity.

The Moslems took the far more radical step of cutting the year loose from the Sun. Their years average 354.36 days — exactly 12 synodic months. That means that each Ramadan arrives 11 days earlier with respect to the seasons.

That's going to be very unpleasant for lots of people in another few years, when Ramadan arrives in the heart of summer. Why? Because Moslems are required to fast from sunrise to sunset all month long. That's one thing in December, and quite another in July.

I've always wondered whether Muhammad would have received this particular command from Allah if he had lived at a higher latitude. (I'll point out without editorializing that when God speaks to a prophet, the message is always couched in the receiving culture's terms.) Mecca and Medina straddle the Tropic of Cancer. From that perspective, having the rigor of fasting vary cyclically by a few hours over a span of many years is probably a worthy spiritual exercise. It must seem very different indeed in Tatarstan, one of the main Moslem areas of Russia, at latitude 54° N. Midsummer day there is 17 hours long!

All in all, I still like the old-fashioned lunisolar calendar best. But as far as I know, no country today uses a lunisolar calendar for civil purposes. And when all is said and done, why should they? Electric lights have made the Moon obsolete.

I've also wondered about the obsession with the Sun in modern Western culture. Voluntarily baking in the Sun was unthinkable in Western cultures prior to the early 20th century, and it's still unthinkable in most of the world. The standard explanation is that when most people worked outdoors, being pale was a sign of prestige — being a member of the leisure class. And now that most people work indoors, being tan is a sign of prestige.

But I think it goes deeper than that. Maybe it's a funny kind of compensation for the fact that every aspect of nature besides the Sun has been banished from everyday life. What do you think?

Hi Tony,
I too, like the Lunisolar calendar.. as you've stated, it's more in tune w/ the seasons. The Gregorian calendar the modern world follows now makes no sense when you think about.. I've always found it funny that the New Year begins in the middle of winter.. Makes more sense to begin the year when life begins to spring forth?! Oh, well. . ..
I'm studying the four seasonal constellations. If you have any direction to point me in, I would be grateful. So many books, SO MUCH info.. I would like to read the most informant on this subject if there is one. Seems to me, you are the best one to ask! 😉
Have a great weekend! Lookin for your answer ~