My first encounter with this apparition of Jupiter was in early January, when I was searching for Comet McNaught in the early-dawn sky. By the time I switched my attention from the comet to the planet, Jupiter was the only "star" still visible in the brightening sky, and it was too low to show much detail through my telescope.

Around the beginning of February, after a spell of cloudy weather, I was startled to see Jupiter shining through my bathroom window, fairly high in a nearly-dark sky, when I woke up in the morning. The sky can change a lot in three weeks!

Time's scythe is part of the planet Saturn's symbol.

This time I also got a clear look at Jupiter's surroundings; it was hanging in Scorpius, a little to the left of the magnificent red supergiant Antares. This also came as a shock, because during last year's apparition, Jupiter was right next to the lovely wide optical double star Alpha Librae, also known by the sonorous name of Zubenelgenubi. It suddenly penetrated my thick head — after a decade of Jupiter-watching — that this is the way Jupiter always moves. During an apparition, when it's on the same side of the Sun as Earth, both planets are moving in the same direction, so Jupiter hovers in more or less the same spot with respect to the stars. Then, during the few months when Jupiter is hidden behind the Sun, and moving in the opposite direction from Earth, it scoots over one full constellation, only to freeze in place again as soon as we catch sight of it. Pretty sneaky for the King of Planets!

For naked-eye viewing, Jupiter's current situation next to the brightest and most colorful of the zodiacal stars is impossible to beat. But it's ominous for telescopic viewing, because the King of Planets is now near the southernmost point of the ecliptic. From my location in Massachusetts, it won't rise more than 25 degrees above the horizon this year — too low for a good view through a telescope unless the atmosphere is abnormally steady. Things won't be any better next year, with Jupiter in Sagittarius. And in 2009 Jupiter will be in Capricornus, just starting its slow climb up the ecliptic. 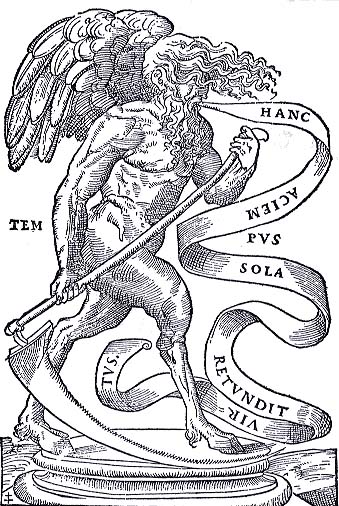 The god Saturn is often depicted as Father Time. The association dates back to classical antiquity and is probably due to the similarity of the Greek words Cronus (Saturn) and Chronos (time).

That's exactly where Jupiter was when I first started keeping track of it through my own telescope in 1997 — in Capricornus, still too low for a good view. No wonder I kept seeing more detail on Jupiter year after year! I thought that it was because my eye was getting better trained, and no doubt that was part of it. But it was due just as much to the fact that every apparition was higher in the sky every year until Jupiter peaked in Gemini in 2002.

The outer planets move at a stately pace; it takes Jupiter 12 years to return to the same spot among the "fixed stars," and 30 years for Saturn. A lot changes in a human life in 12 years — let alone 30. That, presumably, is why the God of Time is associated with the slowest-moving planet known in classical antiquity. In the olden days, people were lucky to witness two full circuits of the planet Saturn before Time mowed them down with his great scythe.

I really enjoyed this blog entry Tony. Fascinating insight into why the ancients made stories assigning the planets the various identities and powers of gods that they did.

Another celestial event that's visually obvious and makes you think back "where was I last time this happened" are "Great Conjunctions" of Jupiter and Saturn. They occur twenty years apart. When I saw my first one of these, I was using a little Tasco 30X40 telescope on a metal TV dinner tray out in the front yard. The Echo satellite was visible many nights that summer, and the early Space Race era was well underway!

Another thing: Venus repeats its appearance pattern every eight years. This late spring/early summer evening elongation is just like 1983, when I moved into a new house, and Venus kept me company late into the evening as I trucked boxes back & forth.