Having written the article predicting Comet LINEAR C/2006 VZ13's close approach to Messier 3, I felt duty-bound to try to observe it myself. But things were not looking promising as Sunday evening approached. The sky was crisscrossed with huge bands of cirrus, and the forecast called for conditions to deteriorate.

But short of solid clouds, I had to try anyway. So I compromised, and rather than trekking far from Boston with a big telescope, I grabbed my 70-mm refractor and drove to Arlington, MA, in the inner suburbs. Sure enough, the area around M3 was entirely enveloped in cirrus haze. On a good night, I can land M3 instantly in binoculars, but this time I had to make the long, painful star-hop from Arcturus.

Once I got there, M3 was plain enough, a tiny fuzzball blazing easily through the moonlit haze. But I could not for the life of me locate the comet. I tried all the tricks in the trade — different magnifications, averted vision, controlled breathing — but all I ended up doing was chasing fluffs of cloud. 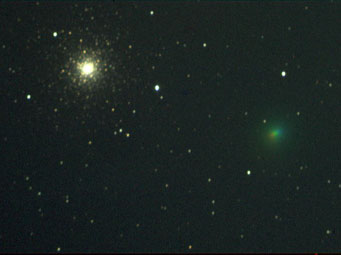 Conditions were better in Virginia, where this photograph was taken, than in Massachusetts.

Other people were luckier. We got a number of fine pictures of the conjunction from American astrophotographers and one spectacular shot from Europe. But everyone who saw the comet seems to have had at least a brief break of genuinely clear sky and a semi-dark observing site.

In retrospect, I should have phrased my prediction more cautiously. The comet had indeed looked very much like a smallish globular cluster when I'd sighted it earlier under dark skies. But if it had been even 1/4 as bright as M3, and equally concentrated, I'm pretty sure that I would have seen it on Sunday night. Well, live and learn.