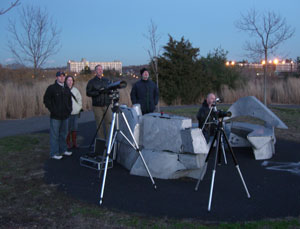 We found the comet. The sky just needs to get a little darker.

Contrary to the weather forecast, the partly cloudy skies did not turn mostly cloudy this afternoon. As sunset neared, it was quite clear, and the few clouds on the western horizon gave me hope that I'd see Comet McNaught. It's been the buzz around the office as photos and reports come in.

At dusk, several coworkers and I walked to the top of the hill in the park across the street from our offices. The perch was modest, but it nevertheless offered a reasonably unobstructed view of the horizon. Venus was quickly spotted, and then the hunt for the comet began. It was a brief hunt. After a few minutes, Dennis di Cicco caught it through a small telescope. Once everyone had the orientation, scopes and binoculars were aimed in that direction. The comet was then obvious, with a bright core. We would have to wait for the sky to darken before the tail stood out.

It took me a while before I could see the comet unaided. A task for the new year is to get new glasses, because distance isn't as clear as it was and I now have to take them off to read fine print. I managed to see the tail with averted vision. McNaught gradually dropped in the reddening sky. Eventually, it fell behind distant trees. It was a good comet — not the best I've seen, but a nice one. Dennis was happy as he saw the comet in the morning and the evening of the same day.

On the walk home, I tried to think of how many comets I've seen, but I don't really know. I recall trying to see Comet Kohoutek in 1973 (when I was 10 years old), but I waited for it to appear in the evening sky, after it fizzled. I didn't hear about Comet West until after its appearance. Another failed attempt was seeing Comet IRAS-Araki-Alcock in 1983 at the University of Maryland. An older guy from the dorm had a lousy pair of binoculars, and since none of us had cars to drive some place dark, three of us walked to an open area in the middle of the campus to try to find it. We didn't.

My first cometary success was Comet Halley two years later. I managed to spot it near the Pleiades using a dormmate's cheap refractor by looking out the dorm window. I had to lie on my back and hold the telescope over my head.

I had better looks at Halley. In March 1986, I took friends from college a bit south of Washington DC to a spot I thought would provide a decent view looking over the Potomac River. Along the road to Mount Vernon, dozens of people had pulled to the side to see Halley's comet before sunrise (the four-lane George Washington Parkway was reduced to two because of construction, leaving plenty of parking behind a line of cones). After that trip, my sister wanted to see it. And my mother asked, "Can we go too?" I felt like an idiot for not asking my parents if they wanted to see it. I think it was the next Saturday morning, we all got up very early and drove to the same spot. I was glad I could show them the comet.

Since then there have been many other comets. Some were just faint, fuzzy blobs; one glimpse of them was enough. Others have sported nice tails. But 1996's Comet Hyakutake was the best. Seeing it in a dark sky, spread out as long as the Big Dipper, was a truly awesome sight. It was then that I understood why comets scared the ancients — it was eerie. Comet Hale-Bopp was cool too, especially using a telescope to see the material spiraling away from the nucleus.

Comet McNaught is a nice surprise. Do try to see it.