For both Venus and Earth, life's last refuge might lie in the clouds.

Before the Space Age, it was common to regard Venus as a planet stuck in a state resembling Earth’s deep past — perhaps a carboniferous swamp world with tree ferns and giant reptiles. Now we know that our nearest planetary neighbor is actually a vision of our likely future.

When Venus and Earth were both young, their surface conditions were probably very similar, sporting warm, organics-rich oceans and active geology. They were the kind of places where we think life could easily have formed, if our current understanding of both the origin of life and of Venus are correct.

Yet the Sun gradually brightens as it ages, causing the inner edge of the habitable zone, where surface water can exist on rocky planets, to slide inexorably outward. Some time in the remote past it swept past Venus, and her seas evaporated. Some time in the future the same thing will happen to Earth.

What became of Venusians (if any existed) when the oceans vanished and the surface became too scalding for organic life? Is it possible that some organisms found sanctuary up in the atmosphere? For more than 20 years I’ve promoted the plausibility of a cloud biosphere on Venus. My mentor Carl Sagan floated this idea even earlier, and some colleagues have elaborated upon it in a recent paper published in the journal Astrobiology.

Conditions in the cloud deck are moderate — roughly the same temperature and pressure as at Earth’s surface. Moreover, plenty of nutrients and energy sources exist there, even liquid water in the form of concentrated sulfuric acid. Also, there are some stubborn riddles concerning the clouds and upper atmosphere that make us wonder. These include unidentified structures inside some of the larger cloud particles, and unidentified material that absorbs most of the solar energy striking the planet, both of which could conceivably have a biological explanation.

Thanks to the discovery of extremophile organisms on Earth, which thrive in strong acid, along with the persistence of those cloud-deck mysteries, interest in the life-in-the-clouds proposal has increased lately. When NASA or another space agency next launches a mission to explore Venus’s atmosphere, astrobiological prospecting surely will be among the goals.

One compelling reason to explore Venus and to reconstruct its past is to understand the far future of Earth. This is true about climate: If we can grasp the mechanism and timing of the runaway greenhouse that destroyed Venus’s surface oceans, we’ll know better what lies ahead for our world when the Sun inevitably warms it to the point that Earth can no longer hold its water (S&T: Oct. 2017, p. 22).

It may be true about geology as well: Plate tectonics, so vital to the functioning of our home world, seems to have ceased on Venus (if it ever operated there at all). We’re not sure why, but it might have to do with the drying out of the interior that accompanied the loss of surface water.
Finally, Venus may even give us a glimpse of our planet’s old age in terms of its biology. If life on a dying oceanic world can migrate to the clouds, as might have taken place on Venus, then that might be the long-term fate of Earth’s biosphere. The clouds may be our planet’s final habitable zone.

Interesting report. I briefly observed Venus in Virgo this morning in SE sky with waning crescent Moon in Virgo, Arcturus in Bootes near 0600 EST (cirrus clouds obscured some). During November, I enjoyed a number of telescope views of Venus. Venus and Mars have CO2 atmospheres, the Earth is chiefly N2O2 (very different). We have a Moon (not to large or small) with oceans and plenty of water, salt as well as fresh. There appear to be myriad variables difference between the Earth, Venus, and Mars concerning habitable conditions. The report says - "The clouds may be our planet’s final habitable zone." Okay, Star War's the Empire Strikes Back with the city in the clouds 🙂 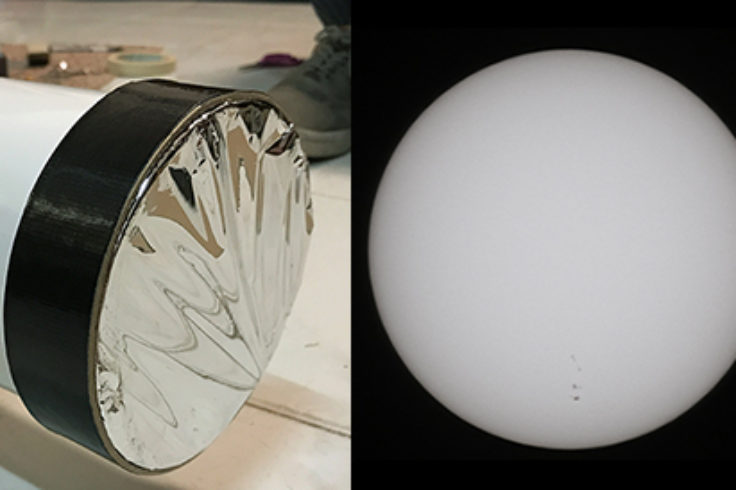 How to Safely Photograph the Sun (and the Transit of Mercury)