Do the Planet Limbo

One of the major new features making a debut in the October S&T is a table showing the visibility of the planets. It's in "Sky at a Glance," the first page of the gatefold. 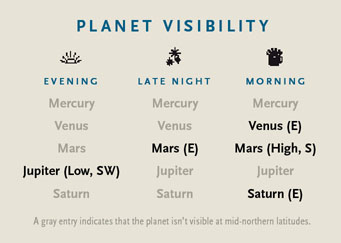 This chart shows Mercury as being invisible throughout October. Yet the planet is still 7.8° above the horizon at sunset on Oct. 1, as seen from latitude 40° north. Should that be high enough to count as visible?

The current design is reasonably clear and effective, but I think I've figured out a much better way to present the information. With any luck, it will run in January.

One problem that's given me a lot of grief is: exactly when does a planet qualify as "visible?" To be more precise, when a planet is near the Sun, how high does it have to be at sunset to ensure that the planet will be visible sometime before it itself sets?

This is an excellent time to study the subject, as we happen to be in the middle of a very poor evening apparition of Mercury (as seen from the Northern Hemisphere). So I went out last night to see if I could find the elusive planet. Frankly, I was pretty confidently expecting failure — even with binoculars. Mercury is now 7.4° above the horizon at sunset, which is mighty low. And it's mag -0.1, which certainly isn't faint, but is nowhere near as bright as it sometimes gets.

But what do you know? At 7:20 pm EDT, 32 minutes after sunset, with the Sun 6.8° below the horizon, I caught a surprisingly bright light shining through the orange glow just 2° above the horizon in my 10×30 binoculars. That was Mercury, looking much like a distant car headlight shining through fog during the day. And as I stared at the spot naked-eye, it flickered into momentary visibility ever few seconds. (Alan MacRobert tells me that this was nothing more than everyday "twinkling," which takes place extremely slowly when you're looking through 10 or 20 atmosphere's worth of air.) 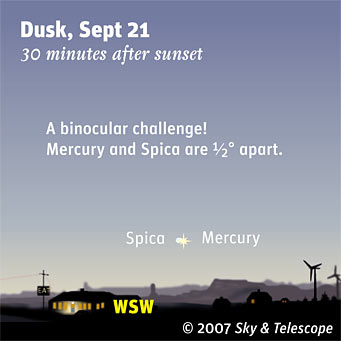 Use binoculars to catch Mercury and Spica in conjunction on Friday evening the 21st. (Their exact positions with respect to each other will depend on where you are.) The old rule is that stars twinkle and planets don't, but when you're viewing through this much of Earth's unsteady atmosphere, even a planet is likely to twinkle a bit.

This also gives some kind of answer about the Venus-Spica encounter that we've touted in the online Sky at a Glance. I had some doubts whether this was really a binocular challenge or a fool's errand. Now I know that there's at least some hope — though I'll point out that I did not see Spica last night. Then again, conditions were far from perfect, and I was using pretty small binoculars. Still, if (against the current forecast) it turns out to be clear on Friday, I'll be looking with a telescope, not binoculars.

I'm very curious what success other people have at viewing this elusive but potentially exciting conjunction. Please report back here. And what's the lowest that you've ever seen Mercury and Venus through the glow of the setting (or rising) Sun? How low can you go?

Looked about 30 mins after sunset from Southern NJ (about 20 miles south of Philadelphia). I was able to easily see the pair in my 10x50 binoculars.