Sky & Telescope readers often comment how much they enjoy reading Sue French's "Deep-Sky Wonders" column. I certainly agree, but to some extent, that's missing the point. Sue is a good enough writer to make her column entertaining as armchair reading, but its real purpose is to be used outside, at night, by the side of a telescope.

Since I'm Sue's regular editor, I make a point of "doing" her columns whenever I get a chance. Among other things, it lets me make sure that the charts and illustrations that I prepare are adequate for finding the things she talks about. And in any case, it's hard to imagine a better way to spend an hour or two. 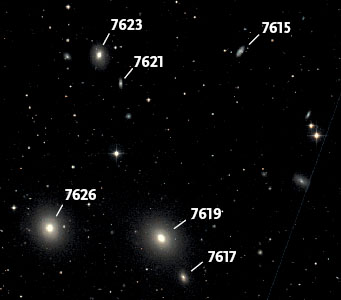 I particularly enjoyed the column in the November 2009 issue because of its variety. Sue starts out exploring Pegasus I, a galaxy cluster with a couple of very prominent members (NGC 7619 and 7623) and a whole host of fainter ones. I was pleased that, using my 12.5-inch Dob last Sunday at my semi-dark second home in rural NY, I was able to log at least a strong "maybe" for all the ones listed in the article.

Sue sometimes fails to get the respect that she deserves from hard-core deep-sky observers -- perhaps because she spends so much time with her 4.1-inch refractor, or perhaps because she never goes out of the way to took her own horn. In fact, she generally sees more through her 10-inch scope from her far-from-dark backyard than I can through my 12.5-incher at a considerably darker site. Then again, she probably devotes ten times as much time as I do to observing, so her superior skill is hardly surprising.

After I'd spent more than an hour straining to see the 14th-magnitude galaxies described in the November Deep-Sky Wonders, I got to unwind with a lovely succession of relatvely easy double stars, the magnificent carbon star TX Piscium (which I often view), and a charming asterism that I never would have stumbled on if Sue hadn't mentioned it.

But don't take my word for it. If you own a telescope, why don't you try "doing" Deep-Sky Wonders yourself? Sue almost always lists one or more targets that are easy for novices to enjoy as well at least one target that's bound to be a challenge for even the most experienced observer.

Sue is certainly a very talented writer but more than that she is a very gifted observer. Her column in S&T and her book are a tribute to goog ols Scotty's Deepsky wonders column.

When will she publish her second book... and when will we be reading her on the S&T website.

Brian Skiff often plies the deep sky with a 70mm refractor. Steven O'mera with a 10cm refractor. Both are great, even legendary observers.

In my mind it is not how deep you look, it's how much do you see? How often? Sue French in those terms (and more) is a world class observer. And Sue has to deal with light pollution every day. Scotty for much of his observing career did not. I love her columns and hope she writes them for the next 30 years! An observer to 'look up to' in my opinion.

I'm a beginner,... and I really enjoy reading Sue French's Deep Sky Wonders. It inspires me to view some additional objects I would not normally know about. And I did get out and see NGC 7619 and NGC 7626. WOW! 170 million light years away! Amazing. Keep her articles coming!
Bob Forgacs

Hi,
I enjoy DSW as many others do and I am wondering if the articles have been compiled into a book.Keep up the good work
Thanks
Jim T