A couple of weeks ago, I promised to write more about my ongoing search for double stars. 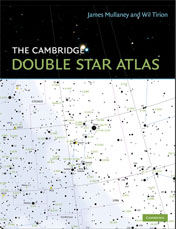 In the course of my double-star sessions, I've realized that what I really like about astronomy is the chance to be outdoors and interacting with nature. Sure, it's winter now, but there's no weather where I'd rather be inside than out. As for nature, its most visible manifestation at night is stars — I just love them! Some people say that looking at just plain old stars (as opposed to deep-sky objects or planets) is boring, but not me. There's something magical about turning my telescope to the sky and seeing all those pinpricks of light appearing as if out of nowhere; I never get tired of it.

That's probably why I love star-hopping; it gives me the maximum opportunity to interact with the stars, to actually utilize them as a means to an end. And if you want to star-hop to double stars, there's no substitute for the Cambridge Double-Star Atlas. Most star atlases mark doubles in some way, but few actually label them with their names, as the CDSA does. 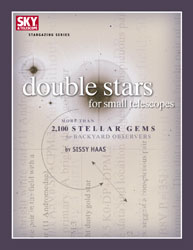 If those aren't enough, Sissy Haas's book Double Stars for Small Telescopes is a virtually inexhaustible source, with complete data and thumbnail descriptions of more than two thousand multiple-star systems. And then, of course, Sue French's "Deep-Sky Wonders" column in every issue of Sky & Telescope almost always mentions a few double stars, including some offbeat choices that you're not likely to see listed anywhere else. That's the great thing about Sue — she covers all the warhorses, as well she should. But she also comes up with lots of weird, wonderful stars and objects that are completely off the beaten track.

Incidentally, the March issue of Sky & Telescope, which is now on sale, has a great article on double stars in Leo by Australian astronomer Richard Jaworski. And don't forget the amazing collection of double-star sketches found on Jeremy Perez's website.

Readers may also be interested in my popular "Field Guide to Double Star Observing" which has chapters on how to observe these beauties and then four seasonal star-hops to guide you to hundreds of the sky's best doubles and a master catalog to record your observations. Email [email protected] for details.

wHY DOES EACH COMMENT HAVE 9IN RED!) "REPORT VIOLATION' AT THE UPPER RIGHT? IS THE WORD REPORT A VERB OR A NOUN?

Another good source of visual doubles can be found in my free Real-Time Astronomy Software for Windows, RTGUI.

As Tony Flanders notes, most double star catalogs do not label the entries with their names, constellations, or any other designation, making it very hard to use. But in its default catalog, RTGUI has a cross-reference of the Washington Double Star catalog with the Yale Bright Star Catalog, resulting in every potentially observable binary or multiple star system in the YBS catalog being flagged and searchable by name, constellation, or SAO number (over 2500 objects).

RTGUI also has, as an auxiliary catalog, the Washington Double Star catalog with 84,468 entries, cross-referenced with the constellation name, and also Bayer or Flamsteed designation, and SAO number, where available, so you can search using those parameters.