I have very mixed feelings about astronomical equipment. There's no doubt that it's important. Galileo's telescope blew the science of astronomy wide open, and every major advance since then has depended on improvements in instrumentation. On a more personal level, telescopes are marvelous, especially when you turn them to the sky. They draw you into a strange, magical world beyond anything that the uninitiated can imagine.

On the other hand, it's easy to get so obsessed by gear that it actually detracts from the observing experience. That's particularly obvious in discussions about astronomy on the Internet, which often degenerate into pointless squabbles about equipment. 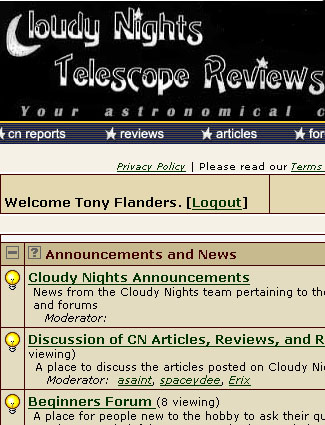 The Cloudy Nights astronomy forums pride themselves on being the friendliest place on the Internet.

I've recently been spending a fair amount of time in the Cloudy Nights forums, which their members describe, with some justification, as "the friendliest place on the Internet." The ambience there is really wonderful; people are genuinely friendly, welcoming, and helpful. But it's interesting to note that the glue that holds the whole thing together is equipment reviews. And it has become the custom for participants to sign their articles with a list of the equipment they use. I went along with that custom when I started to participate, but it still bothers me. True, these equipment lists do tell me something about the participants, but I'd much rather know what people do than what they own. Steve O'Meara's biggest telescope is a 4-incher that's getting on toward being an antique, but nobody doubts his prowess as an observer. Conversely, I've met people who've loaded up on fancy gear and have no clue how to use it.

I spend my fair share of time thumbing through catalogs and dreaming of things I might buy. But I've found that the urge usually goes away if I just sit on it for a while. Because when all is said and done, I absolutely don't need new gadgets; I can't even take proper advantage of the ones I already own. What I really need are clear skies and the time to enjoy them — things that money can't buy.

Tony, I agree completely. The gear-obsessed are just one segment of this avocation, and not representative of most of us. While some hi-tech stuff is necessary for imaging, asteroid occultations, supernova patrol, etc., the joy of walking out into the night with, at most, just a decent pair of binocs can't be beat. You really feel one with the univese when you can greet the constellations by name and enjoy the ballet of planets and moon on the grandest scale. I have found that it's a far more meditational experience to do something simple every clear night, rather than have to wrestle with ornery equipment and miss the big picture.

As you say, the catalogues of new equipment always look so tempting but what we really need are the clear skies and time.

But one thing I would like to see on new telescopes, rather than ever more extensive software and GPS etc. is an effective, built-in dew control system.

I know one can buy after market kits, but that just leads to longer set-up time, more wires to trip over and power supply issues.

Surely that would be more useful than GPS 🙂

Tony notes: There are, in fact, some telescopes with built-in dew heaters. The Meade RCX line and some of the premium Dobsonians are examples that come to mind.

Well said. Your article will make me think twice before I buy something new. My wife has really helped here. She makes me think twice quite often and more times than not I really don't need whatever it is I thought I did.

Tony responds: Thinking twice is always a good idea, but going strictly
by what you need is a little too puritanical even for me. The question
I always try to ask myself is whether the new toy will actually make a
clear, qualitative difference in my observing experience.

Your nailed it quite well... It seems that many people try to establish themselves in this hobby by showing off what they can buy with their money. While that means good business for manufacturers, some newcomers into the hobby may be deterred by (false!) perception that one cannot do anything in astronomy without spending lots of cash…

However, there may be a plus side of the whole situation: one day “owners” will run out of storage space or loose interest in astronomy, so their stuff may be available cheap to people who may know what to do with it 😉

I've always admired the amature telescope maker. They are like the "white hats" of the gear-obsessed.

I belong to a splinter group: the gear-fascinated. I love to observe. But, as an engineer, I like to obsess about my modest gear (a free 4.5" EQ) without laying out much cash. I find satisfaction while becomming ultra familiar with what I have and scheming of ways to fully utilize it. I find this fascination compliments what I learn from observing and everything is more fun.