As I said in my last blog, I will be spending this week in Southern California, touring the astronomy sights, observing the night sky, and doing as much hiking as possible. 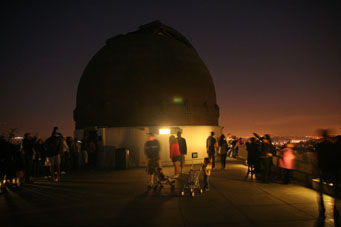 Griffith Observatory has nightly viewings through its 12-inch refracting telescope.

Sunday, my first full day, was devoted to the Griffith Observatory. In addition to being a museum and planetarium, Griffith has nightly viewings through its 12-inch Zeiss refracting telescope. It's also the centerpiece of Griffith Park, one of the finest, best-kept, and best-used urban parks in the world.

Visiting Griffith was one of those gratifying experiences where I started out with high expectations, and the expectations were met and exceeded. The museum portion of the Observatory is modest-sized -- which is just as well, because I and many others are easily overwhelmed or bored by big museums. But the displays are very well thought out, both engaging and educational, which is a lot harder to achieve than it sounds. 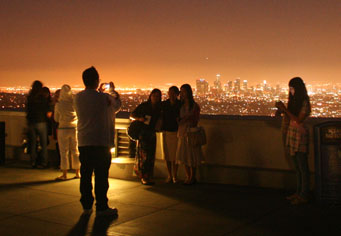 A family poses on Griffith's balcony with the lights of Los Angeles in the background.

Griffith is full of references to the local area. In other places, that might seem provincial, but in Southern California it's completely appropriate. Whether you measure by scientists, telescopes, or space exploration, Southern California was probably the single biggest driving force for astronomy throughout most of the 20th century.

That, in turn, reflects its natural advantages: a favorable latitude, ample clear skies, and an inexhaustible supply of mountaintops for siting telescopes. Situated on a spur of 1,640-foot Mount Hollywood, overlooking the entire Los Angeles basin, Griffith Observatory exploits those advantages to the fullest. 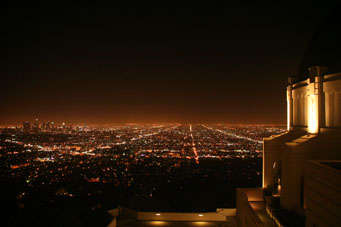 Griffith Observatory is an architectural masterpiece.

They boast that more people have looked through their 12-inch Zeiss refractor than through any other telescope in the world — and I see no reason to doubt it. They have public viewings from sunset to 10 p.m. on every clear night, and most nights in Los Angeles are clear. Judging by my one experience, the events are very well attended. Waiting on line for an hour for a one-minute peek through a telescope might be onerous in another setting. But who could ask for a better place to stand on line than balmy Los Angeles, with the city lights spread out below you all the way to the Pacific Ocean? 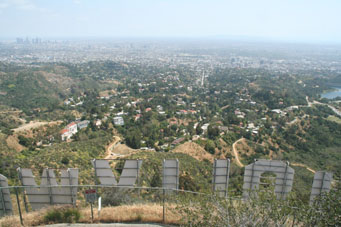 The famous Hollywood sign is near the top of 1,704-foot Mt. Lee, adjacent to Griffith Observatory.

If this were a hiking blog rather than an astronomy blog, I would also describe what I did between the daytime and nighttime parts of my visit to Griffith. Many of the people who visit the observatory also stroll up the easy trail to the top of Mount Hollywood, which has a panoramic view of the entire metropolitan area and the huge San Gabriel Mountains nearby. Fewer people — but still lots — do as I did, and follow the horshoe-shaped ridge over to the top of 1,704-foot Mt. Lee, where you can look down on the back side of the famous Hollywood sign. You can take the easy, long way along carriage roads or the shorter but very rugged trail along the ridgetop. May following a wet winter is the perfect time to do it, because the chaparral is in full bloom.

My Father took me to Griffith Observatory when I was 12 years old and I never forgot it. I was able to take my own Son a few weeks ago and I will never forget that as well. What a great way to get kids interested in Science.

I would like to know what you saw in that telescope after an hours+ wait. And how did the evident light pollution at the site affect the experience? That level of light pollution is definitely not part of Griffith's "natural advantages" ! When are cities managers going to wake up to the cost of poorly controlled night lighting and the loss of a natural habitat, the night sky, available to all, on the condition that the lighting doesn't extinguish it !

My parents took me there when I was 4 years old in 1948, me too young to be admitted to the planetarium. I had to sit outside alone on the steps while everyone else enjoyed the show. That proved to me that there was something secret and exciting about astronomy, and the feeling never went away. I wrote a letter to the Director when I was 5, asking if the two stars in the tail of Scorpio were a gravity double. He wrote back! The two were probably not. I wish I hadn't lost that amazing reply to a future Minor in Astronomy. What a nice guy!

Thanks for interesting article - looks as if it is also a fantastic site to observe artificial stars (lights of LA)!

A small gripe - can you fix some grammar? You wait in line in a queue (not on line). You wait for information, not on information . . .

Judy asks: "I would like to know what you saw in that telescope after an hours+ wait. And how did the evident light pollution at the site affect the experience?" Well, what single object would you show somebody through a big refractor at this time of year? Saturn, of course! So the light pollution didn't hurt the view one bit. Obviously, it would be great if L.A.'s light pollution were less, but it's really not so terrible for a city of its size. And realistically, the skyglow could be reduced twofold, or maybe even fourfold, but that would still leave the site unsuitable for viewuing (say) galaxies. Fortunately, there's always some astronomical target to view regardless of how bright or dark the sky is.

The first record album I ever bought as a kid, circa 1964 or '65, was THE VENTURES IN SPACE, which had one of the all-time cool covers. The scene was of a boy and a girl in a hot-rod parked in some place that overlooked a vast panorama of a city at night. The scene didn't quite relate to the album's theme of space-related music, but somehow it worked just the same. In later years, I've come to wonder if the photo was shot in the back parking lot of the Griffith Observatory. (The car is facing the wrong way to have just pulled over on Mulholland Drive.) If the picture was taken there... it really would give the cover a space connection.