Seventeen months ago, I took a break from my weekly blog, entitled Stargazing. Now I've decided to resuscitate it, though I doubt that I'll have time to write a new entry each week.

The entry that you're reading now was inspired by my ongoing obsession with measuring skyglow — a quantity that's immensely important to all stargazers, but very difficult to quantify. (see my online article if you don't know what skyglow is or why it matters.) If you visit someone's backyard, you can see for yourself what his or her light pollution is like. But how can you describe your skyglow to someone 5,000 miles away that you've met over the internet? 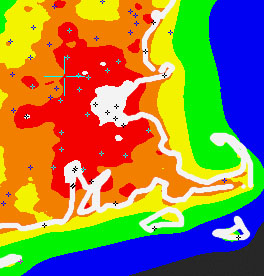 This excerpt from the Clear Sky Chart's rendition of the Light Pollution Atlas marks the site of my astronomy club's observing field with a big cross.

This map shows a classic bull's eye pattern, with gradually decreasing skyglow around the central city of Boston. But how well does this match reality?

The three methods that seem most promising to me are digital cameras, the Sky Quality Meter (SQM) and SQM-L, and the Light Pollution Atlas, which is perhaps best known through its incorporation into the Clear Sky Chart.

Of these, the only method that can be applied without specialized equipment and skills — indeed, without even setting foot outside — is to find one's color zone in the Light Pollution Atlas. Jonathan Tomshine's Dark Sky Finder website has made this extremely easy for anybody in the U.S. or southern Canada.

But the authors of the Light Pollution Atlas have always been happy to admit that its color zones are tentative. They're based on satellite data collected more than a decade ago, over a long timespan, in varying conditions, and massaged by an experimental mathematical model of how skyglow spreadst.

To check the validity of the color zones around my home near Boston, MA, I went to Groton, a town just outside the red zone, and drove from there to my own home deep in the white zone, measuring skyglow along the way with my SQM-L, using a digital camera as a cross-check. 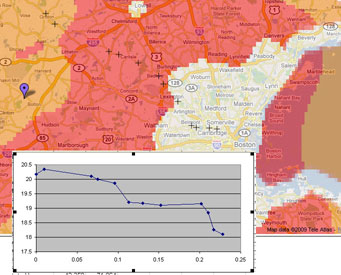 Measurements were taken at the spots marked by + signs, and the skyglow (in magnitude per square arcsecond) was plotted as a function of longitude. Click on the map for a larger image.

My measurements, shown at right, cast some doubt on the mathematical model behind color zones. For one thing, my measurements were consistently darker than the ones predicted by the key to the Clear Sky Chart's light-pollution maps. More intriguingly, the skyglow did not increase continuously, as I had expected, but followed an unmistakable step pattern. This suggests that highly local conditions play a larger role in skyglow than I would have guessed. The skyglow that I measured remained essentially constant starting 14 miles from the city center, well out in the red zone, until 7 miles from the city center, deep in the white. Throughout this area, it's dark enough to see the summer Milky Way fairly easily when it's overhead. Then, in the next three miles, the skyglow doubled.

Here's my seat-of-the-pants interpretation. I caution that this needs lots more data before it can be taken as a scientific conclusion. I think that the steps on the light-pollution curve reflect local residential patterns, cultural attitudes, and streetlighting practices.

The first big jump happened when I crossed the line from Carlisle into Bedford. Carlisle is a faux-rural suburb with 2-acre zoning, hardly any streetlights, and no bright private lighting. Unshielded mercury-vapor bulbs are for poor people, and garish "architectural lighting" is for the nouveau riche. Old money needs no glare bombs to feel safe nor any ostentatious display to feel self-confident. Houses in Carlisle have dim outdoor lights or none at all.

Bedford is much more typical of a mid-to-outer suburb, with three times Carlisle's population density, significant commercial development, and regular streetlights along the roads. But houses are still pretty far apart, and the street lighting is designed primarily to supplement automobile headlights. There are pedestrians in Bedford, but distances are too far for most people to do errands on foot.

The reading seven miles from Boston was taken at the western foot of Belmont Hill, an escarpment with lots of conservation land and broad estates. Hardly any of the skyglow there has local origins; it's almost all from the urban area on the other side of the Hill.

Then, at the eastern foot of Belmont Hill, the undeveloped land stops abruptly, and from there all the way into the center of Boston, all the houses are cheek by jowl, and the streets have broad sidewalks and closely spaced streetlights. This is where the skyglows starts to climb really sharply — roughly in proportion to the population density.

The color zones of the Light Pollution Atlas suggest a step pattern, but that's actually an illusion — an artifact inevitable in any color-coded map with coarse contour lines. The underlying mathematical model indicates that the transitions should be gradual. But my measurements suggest that abrupt transitions are the rule rather than the exception, at least in the Boston area. More research is needed!

Click here to see a tab-separated table containing details of my measurements.

I'm right next door in Chelmsford and I have noticed similar effects. The Skyglow map says my viewing should be terrible but I've found viewing to be surprisingly good especially in the spring and fall with low humidity. But like you said my neighbor's security light is the only thorn in my viewing side.

The quantity of dust and humidity probably influence the production of sky light pollution maps. Do you have any way to correlate your actual values with those the maps expected?