Guest Blog: In Defence of GPS

I was particularly struck by one of the comments on my blog Tunnel Vision Navigation, by Dieter Kreuer from Germany. Sadly, our web software removes paragraph breaks from comments, making long ones hard to read. So I'm reproducing it here, with permission and a few minor edits.

I agree with absolutely everything that Dieter has said — except that anybody who thinks that all streets in the U.S. are geometrically laid out and well signed has never been in Boston! I particularly admire the way he took my metaphor of automobile navigation and turned it around. Yes, driving a car while reading a map is incredibly dangerous — no doubt about it.

On balance, I have no doubt that GPS devices in cars and Go To drives on telescopes are good things. At the same time, it's clear to me that they have serious downsides. And the good and bad seem to be inextricably linked. 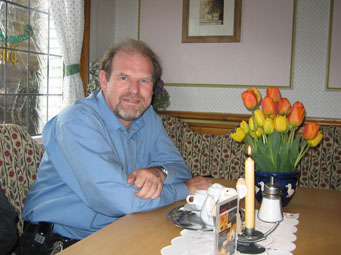 It's certainly true that reading a GPS device can distract the driver and cause serious accidents. However, so can reading a printed map while driving! I would even say that a GPS device mounted with a suction holder to the windscreen and giving additional vocal directions distracts less than a map held to steering wheel or lying on the co-driver's seat (unless you have an actual co-driver giving the directions!).

In Europe, where streets are not geometrically laid out and well tagged with names as in the US, even looking around to find the correct turn may be a distraction, which is lowered a lot by using a GPS. But yes, there are stories of people misinterpreting GPS directions and ending up on railroad tracks, and even down ferry ramps into rivers. And very often trucks get stuck in front of bridges or tunnels on streets much too small for them. So checking a map before the trip is certainly a good idea.

To get back on topic, the same is true for watching the skies. Tony's point is certainly that some people use their Go To scopes without the slightest idea how to get around in the skies, which is a valid argument. Every amateur astronomer should learn the constellations, star names of bright stars and locations of the most important sky splendors. I too have done so for more than 30 years, but I'm really thankful that Go To now enables me to spend most of the time with watching my desired target rather than finding my way to it.

I posted a comment in defence of encouraging people to learn to navigate (land or sky), but I agree wholeheartedly with Dieter's comments here. I suppose the difference with the sky is that you're not likely to hurt yourself or anyone else by Go-To-ing to the wrong cluster, or star-hopping with a map on your knees! Certainly, the benefits of GPS and Go-To technology open up the skies or the landscape to people in ways not previously encountered. For a non-dangerous hobby like astronomy this comes without the hazard of walking off a cliff or driving onto a railway, and so even beginners can find a remote or obscure object that they might never before have located.

I'd still encourage people to learn to read maps or to navigate the skies to the best of their ability as a means of gaining a real familiarity with your surroundings, and finding unexplored treasures on the way. And you're not totally lost when the GPS breaks too...

I can appreciate that in an ideal world the incentive to learn where stars are in relation to each other, and to recognise the constellations would be nice. However, for a lot of people it's an expensive luxury.

It's been a little over 10 years since I got my first telescope (a GOTO model). During the decade or so that I've been using it I have kept an informal log of my "nights out". From that I reckon that on average, I get between 15 and 20 nights a year when I can do some observing. Not necessarily a whole night, it might just be an hour or two from when the sun goes down to when the clouds roll in - or to a self-imposed limit if I have to work the next day.

In those precious hours, I want to maximise the proportion of my time spent doing my hobby (observing) and to minimise the overheads - which would include getting to the target in question, setting up and aligning the telescope. It may well be that for those fortunate enough to have more than one or two cloud-free nights each month, the time spent learning the sky reaps its own rewards. but for me, in my situation it would make the hobby impractical.

Dear Peter, perhaps you overestimate the effort of learning the constellations. There are 88 of them, but you cannot see a good part of them from northern latitudes, and many of them are small and faint and thus not very important (like e.g. Camelopardalis, the giraffe). However, I think every hobby astronomer should know the cornerstones of the sky, such as the Big Dipper (part of Ursa Major), Cassiopeia, Auriga the charioteer, Perseus, Cygnus the swan, Lyra the lyre, Aquila the eagle, Bootes, Andromeda, Pegasus, Orion, and the bright zodiacal constellations Taurus the bull, Gemini the twins, Leo the lion and Scorpius the scorpion. That's 15, which provide a basic orientation. They can tell you the time of year and your approximate latitude, when you travel. If you know the brightest star of each by name, plus Sirius and Procyon near Orion, you know the most important stars, too. That should not be too difficult or time-consuming to learn, if you take two constellations a month. All it takes is a simple star map like the centrefold in every S&T magazine, and 10 minutes to locate the object in the sky, e.g. when you start and end your observing session. You don't need to memorise every single star in the constellation, just recognising the pattern will do.
Why bother? 1)It's informative. It helps you communicating with fellow hobbyists and when reading articles. 2) It's useful. You can then read a printed sky map and locate a comet or Messier object with binocs. 3) It's fun. You will get a bunch of new friends for lifetime, that you will recognise on every travel and even on night sky pictures made from Mars. Makes you feel like home anywhere.

I'm happy this important conversation is continuing, and grateful to Tony for reposting Dieter's comment above. [ -- Paragraph break -- ] I use a manual altazimuth mount for my 5-inch Schmidt-Cassegrain telescope, and I spend a lot of time observing naked-eye or with hand-held or mounted binoculars, as well. Year by year I learn more about the night sky, and I get to enjoy watching old friends rising above the horizon season by season. Objects that were challenging to find last year are easier this year. I sometimes spend a fair bit of time looking for faint objects, and often I'm not able to find them (targets near the zenith are especially difficult with a manual alt-az, and my city back yard is pretty light-polluted). There are always brighter and easier objects to console me. Overall, I wouldn't trade the quick set-up and ease of use of my current rig for the complications and expense of a goto system. [ -- Paragraph break -- ] Goto systems clearly have huge advantages in finding objects quickly and consistently. But even if you're using a goto system, if you learn the night sky and find your objects visually as well as mechanically, your observing experience will be greatly enriched. Dieter's list of key constellations is a good one; for observers in the temperate latitudes, I would add Sagittarius for its beautiful nebulae and the fact that the center of our galaxy is in Sagittarius.

"Go To" and GPS are nice but I sometimes find it fun to test my memory and knowledge to see if I can find my way there without the high-tech help. My latest excercise was to use Google Earth to find all the houses I lived in since I was born. My father was career Army as was I so there are almost 50 sites to find! I found all of them ... even those where the house was now gone and something else is no in its place ... the private rental house we lived in in Taipei, Taiwan back in 1954. One of the tallest buildings in the world, Taipei 101, sits on that site now! My how things have changed!

I agree everyone should know the constellations and how to star hop to what they want to observe. I also think no one should bring an infant into the world without being emotionally and financially able to provide for it. I also believe we should be able to trust our elected officials.

In the meantime I pay taxes to support other people's offspring, am taken advantage of by the people who are supposed to represent me and use a computer guided, gps equipped telescope. you just have to resolve to change what you can and make the best of life as it comes to you. Enjoy the clear skies as best you can when they are there.