Has Your Observing Site Gotten Brighter?

I was rather taken aback a few weeks ago when Kelly Beatty started his blog about Kitt Peak by asking, "How many of you can claim that your favorite stargazing spot is as dark now as it was five years ago, let alone 10 or 20?" — as though he was clearly expecting the answer to be "no." 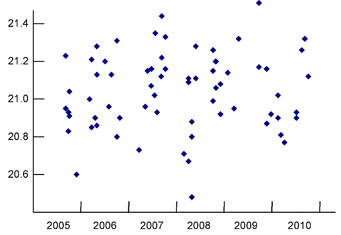 The zenithal sky brightness in New Lebanon, NY, has not changed appreciably over the last 5 years. Measurements are in magnitude per square arcsecond, and higher values mean darker skies.

In fact, I use several different observing sites, and I think they're all as dark as they were 5 or 10 years ago — so I sort of assumed that this is typical for the U.S. Northeast. In fact, I kinda think that my my country home is as dark as it was 35 years ago, when I first started seriously exploring the sky with 7×35 binoculars. But I strongly suspect that's not typical.

I actually have solid evidence from the last 5 years, ever since I purchased my Sky Quality Meter. I've taken hundreds of readings with it, and none of them show a clear trend of change over time.

This isn't entirely surprising, because to some extent light pollution is proportional to population, and most of the population growth in the U.S. over the past few decades has been in the South and the West. The Northeast has grown, but at a very modest pace. 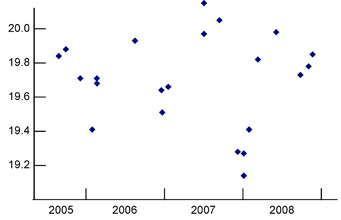 Skies have not changed appreciably since 2005 at the Amateur Telescope Makers of Boston observing field in Westford, MA.

Moreover, almost all the growth in the Northeast has been in middle and outer suburbs. The major cities all reached their current configuration in the 20s, and the inner suburbs in the 50s and 60s. And rural areas have, if anything, lost population.

So what about the mid and outer suburbs? Well, that's exactly where my astronomy club's observing field is. And there, also, I see no evidence of change over the last 5 years. (Click here if you can't see the graph at right.)

Round about now you may be wondering if all these Sky Quality Meter readings are just noise. Are there any meaningful patterns to be made out of them? Well, yes, in fact. When I plotted the measurements against time of night, the darkest readings are all around or after midnight. (Click here if you can't see them.) In case you're wondering — yes, I filtered out all the readings before the end of astronomical twilight. This effect is entirely due to decrease in artificial light. The same trend is discernible, though much weaker, at my country home. My guess is that it's partly due to commercial and home lights being turned off, but also very largely to the decrease in traffic. I strongly suspect that automobile headlights are the second biggest source of light pollution, exceeded only by streetlights. 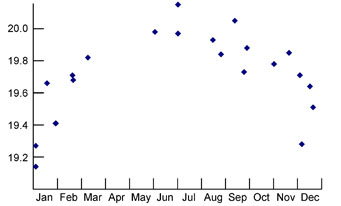 But the most striking trend of all comes when I plot the measurements against time of year. The graph at right (click here if you can't see it) shows that darkness falls sharply after mid-October . . . just like the falling leaves on the trees, which are no doubt the primary culprit. That's not surprising at all, because New England is very heavily wooded. In the cities in particular, almost all the streetlights are directly under trees, which prevent their light from shining up into the sky. Conversely, the sky becomes much brighter when there's fresh snow under the streetlights. For more information on this effect, see my blog on the Snow-Corrected Light-Pollution Atlas.

When I first bought my SQM I was getting best readings of 19.3 - 19.4. Now I'm up to the high 19's: 19.7. Just eyeballing it, I used to reckon I had about a VLM of about 3.5. Now on the best nights it's pushing up to 4. This is from my semi-rural back garden on the outskirts of a small town (pop 16,000)
The only thing that has changed is the street lighting which the local council changed from "omni-directional" yellow sodium to something closer to a full cut-off white light.
We still have orange skies up to about 30Â° but at the zenith, it's definitely darker.

How do I know?

I have lived in this suburban Philadelphia town of Lower Makefield, Bucks County since 1981 and the area has grown tremendously over that time span.

And so has the light pollution:(

It's gotten so bad that I hardly can see enough stars to use my Dobsonian guide scope!

How do I know?

I have lived in this suburban Philadelphia town of Lower Makefield, Bucks County since 1981 and the area has grown tremendously over that time span.

And so has the light pollution:(

It's gotten so bad that I hardly can see enough stars to use my Dobsonian guide scope!

Well, I live in Brookline Mass (right outside of Boston) 5 out of 7 nights of the week and yes. Its gotten so bad that I sometimes can't even see Sirus or Polaris :O

When I'm at my Cape Cod house, I can see the Milky Way with amazing clarity (when its not cloudy :P) but there is a horrific orange glow in the Boston-ish direction.

Well, lets hope that the World Wide Star Count gets some attention for the brightening skies that is very much needed!

When I was a child (1950) I could see the Milky way
but now nothing but the big dipper, as a gage.
The planets are still good to view,on a good night I can see the ring nebula in Lyra, the double double also.
Sagittarius is still good but dim .
Thanks
Bob

Ten years ago at my dark sky site I could barely see my fingers at the end of my extended hand and we could see shadows when Venus was shining at dawn and Jupiter was almost light pollution. Today we can see people walking 20 meters around. My problem is that there are no other places with better sky at similar distances from my city.

At my home in Lima, the sky has turned orange at night and the visual limiting magnitude is 1 or brighter. Ten years ago the visual magnitude limit was 3-4. Only a couple of years ago I could easily see the four main stars of Leo (Rigel, Algieba, Zosma and Denebola) from my backyard. This year only once or twice could see the four stars. Even Spica was hard to see for others unless directly showed. But is true that there is a noticeable darkening of the sky after midnight.