Hiking Under the Stars

Astronomy is an unusual hobby; it snares lots of different kinds of people for many different reasons. For me, it was a natural outgrowth of my love of the outdoors. The one activity that I love even more than stargazing is hiking in the mountains. And combining hiking and stargazing is best of all! 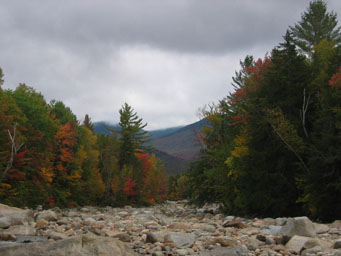 The East Branch of the Pemigewasset River drains many of the highest mountains in New England.

Most people who hike in the U.S. Northeast would agree that September is the best time to do so. The oppressive heat and bugs of summer are gone, the chance of rain is low and the chance of snow even lower, yet the days are still reasonably long. So for the last weekend in September, I took Friday off to do a three-day hike that I'd long dreamed of and never attempted. For those who know New Hampshire's White Mountains, I went north up the Bonds, west across South Twin and Garfield, and then south down the Franconia Range. Many geologists believe that the striking horseshoe-shaped ridge that I followed is the remains of an ancient volcanic caldera.

The weather proceeded exactly as forecast. Friday started cloudy and drizzly, then turned crisp, cool, and windy. Saturday was predicted to be perfect hiking weather, which it indeed turned out to be — cloudless skies, crystal-clear air, gentle breezes, and temperatures around 40°F. (That's T-shirt weather when you're doing strenuous hiking.) 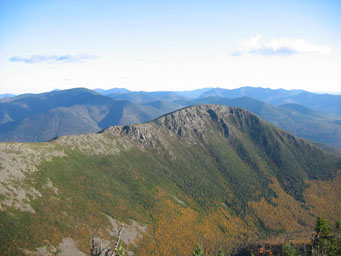 West Bond is a short hike from Guyot Shelter, where the author spent his first night. From this peak, you can see nothing but woods and mountains in all directions.

I spent Friday night at Guyot Shelter, high up in the mountains and as far from civilization as you can get in New Hampshire. I was eager to rise early for two reasons. I wanted to take advantage of Saturday's weather and hike as far as possible. And since this was first-quarter Moon, the sky would be truly dark before dawn — giving me a great chance to see the zodiacal light. And indeed, when I awoke around 4:30 on Saturday morning, there was the zodiacal light shining between two trees — as fine a view of it as I've had for several years.

Packing up as quietly as I could to avoid wakening my shelter-mates, I hiked up to the main trail and started to cook breakfast before the first sign of dawn. I could only see the narrow strip of sky above the trail, but that was enough! The Milky Way from Cassiopeia to Auriga ran directly overhead, intricately veined with dark lanes, with the Double Cluster blazing in its center. Quite a backdrop for breakfast! 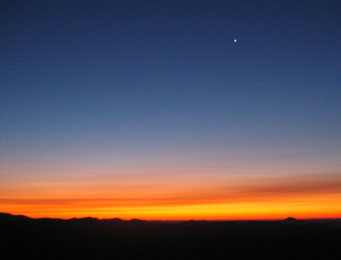 By the time I was actually hiking, the sky was getting light. Shortly afterward, I emerged above treeline on Mount Guyot to the most glorious view imaginable. Orion and Canis Major were still prominent in the south, while Mars, Castor, and Pollux made a perfect arc overhead. But Venus dominated the view, blazing above a magnificent sunrise glow that stretched the entire length of the eastern horizon. I put on my down jacket and mittens and snapped endless pictures as the sky grew brighter and the mountains around took on a rosy hue. In the lowlands to the north, isolated hills rose out of a sea of fog as far as I could see.

I started to hike again, ducked into the trees, and by the time I emerged above treeline again on South Twin, the Sun was well above the horizon. 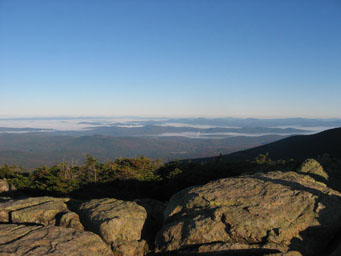 Saturday was a great day of hiking by any standard — I ended up walking 14 hours though some of the finest scenery in the East, at one of the loveliest times of year. I crossed six mountaintops, each with a wonderful view, each very different from all the others. And I certainly got a good workout! But none of the time that I spent walking during broad daylight came close to the magic of those hours between the first sight of the zodiacal light and the disappearance of the last stars.

It's good to know that the East Coast still has places where the Milky Way is visible. Although my neighborhood, the Pacific Northwest, has plenty of dark skies, I like to make astrophotographs from urban areas. Here's one from under I-5 in Seattle: That would be so cool to be in the Mountains with the beauty of nature and looking into the stars. If only I had those views in Indiana. But oh well, there are still good places to go for astronomy and nature.

If you love to photograph every beauty, there is another attraction in September and October and it's very beautiful golden trees that if you know how to over-expose your photo with this trees and dark skies, it will give you wonders