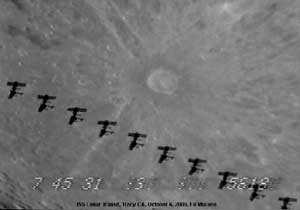 Over the weekend, the Astronomy Picture of the Day featured another photo of the profile of the International Space Station. Ed Morana's video composite shows the station sporting its new solar panels as seen against the Moon. The panels were installed in September when the Space Shuttle Atlantis visited the station, which was captured in silhouette by Thierry Legault.

How did these guys know when and where ISS was going to cross the face of the Moon or Sun? They used Thomas Fly's e-mail alert service. I wrote about the service in the June 2004 issue of S&T (page 112). I visited the website this morning to make sure it was still running, but I wasn't sure if it was based on the site's latest update. I wrote to Fly and he explained that it is operational, but the sign-up page on his site is broken. Nevertheless, you can still subscribe to the alerts.

To be notified when the space station will transit the Sun, Moon, or bright planet (Mercury through Saturn) in your area, Fly says that people can e-mail him at [email protected] with the following information:

Determining ISS passages can also be calculated at the Celestial Observer, or CalSKY, website, which offers a similar e-mail bulletin. This is how Legault was alerted to the solar transit noted above.

Seeing (or photographing) the event will take more effort than just being notified. You'll likely have to consult maps to place yourself in exactly the right spot. For more details, read Fly's and Morana's websites.