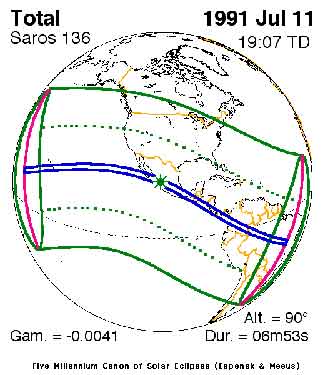 The total solar eclipse of July 11, 1991, was seen by many — including me. Click on the image to view the full animation of Saros 136 assembled by Dan McGlaun.

A few weeks ago, many Sky & Telescope editors received copies of Five Millennium Canon of Solar Eclipses: -1999 to +3000 by Fred Espenak and Jean Meeus. At about 650 pages, it's an impressive summary of the circumstances of nearly 12,000 eclipses, as well as how the information was calculated.

I was interested in announcing the book in S&T as a Briefly Noted in the Books & Beyond department. However, I discovered that it's rather expensive if you want to buy a printed copy. The book is a NASA Technical Publication, and is thus made available from a couple of government publication clearinghouses (not the good ol' Government Printing Office).

If you want the information in its massive form, you can print it yourself by downloading PDF files at NASA's Eclipse Page. If you really want to buy a printed copy, however, it will run you $113 from the National Technical Information Service.

If you've been alive long enough (or have flipped through eclipse guides looking at all the maps), you may have noticed that eclipse tracks sometimes look similar. It turns out that they repeat somewhat. For example, the total solar eclipse that I witnessed in Mexico on July 11, 1991, will (sort of) come again in July 22, 2009, when the geometry of the Sun, Earth, and Moon will be very similar to that of the previous time. But the path of the Moon's shadow won't cross the same part of the Earth. Instead of Hawaii and Mexico, the path will cross China and Iwo Jima. These two eclipses are members of what's called a Saros series — in their case Saros 136.

Eclipses of the same Saros series happen 18 years and 11.3 days apart. Each time, the path moves a little farther north or south. An excellent illustration of this cycle can be seen in the yeoman's effort of eclipse enthusiast Dan McGlaun. He took all the individual images from the Five Millennium Canon, like the one above, and made animations showing the progression of each full Saros cycle.