It's school vacation week in Massachusetts, so I'm taking a couple of days off from work to stay with my wife and daughter at our second home in upstate New York. The snow that turned to ice in Boston left more than a foot of fluffy powder here, so we're all getting our first taste of proper winter. 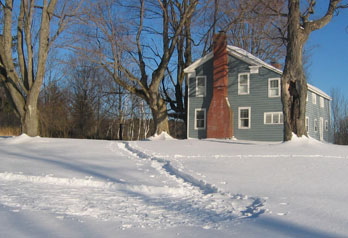 In deep snow, it's much less work to pack down an observing spot with snowshoes than to shovel it out.

I woke up around five o'clock this morning, as usual, and saw that it was clear out. So I pulled on several layers of clothes, gulped down a cup of coffee, and dashed outside to catch the very beginning of astronomical twilight. I'd packed down my customary observing spot the previous evening, but there wasn't nearly enough time to set up a telescope. Instead, I just used my 10x30 image-stabilized binoculars and my own eyes.

The beginning of twilight at this time of year shows roughly the same sky as the end of twilight in early June, with Libra on the meridian. It's a strange sidereal time, when the galaxies usually viewed in April and May evenings are on their way down but the summer Milky Way isn't quite up. My little binoculars showed me a little of each — some fuzz spots in the Virgo Cluster that I didn't have time to identify; the great late-spring globular clusters M3, M5, M10, and M12; and the open clusters M29 and M39 in Cygnus that I'd viewed in the evening sky not long ago.

The prime attraction, of course, is Scorpius climbing toward the meridian with Jupiter in tow. Right now, Scorpius is particularly interesting because of Nova Scorpii 2007. But because of the hill and trees along the southern horizon, I actually got a worse view of Scorpius here this morning than I did a few mornings earlier from my city home — a view that I'll write about in a future blog entry.