Any time I write or edit an observing article for the magazine or the website, I try to observe everything that's described. How else can I make sure the descriptions are accurate? And it provides a never-ending stream of new and different observing targets. 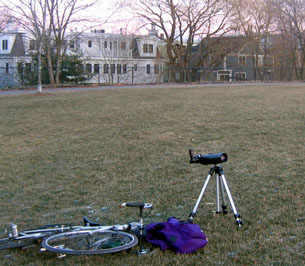 You've already seen my little refractor on my dining-room windowsill, and here it is in another familiar setting: Danehy Park, right across the street from S&T's offices, which also happens to be the closest good observing spot to my own home. With an unobstructed horizon in almost every direction, it's ideal for viewing twilight subjects like Mercury and Comet McNaught.

Deep-sky observing with a scope this small sometimes seems a little pig-headed, especially under bright city skies, but it's perfect for this purpose. When viewing a planet 15° off the horizon, the sharpness of the view usually depends more on the steadiness of the air than the aperture of the telescope.

In case you're wondering, the tripod legs are fully retracted for stability in the gusty wind. I'm quite comfortable sitting on the ground for five or ten minutes.

Having written a web story urging people to look for the phases of Venus and Mercury, I felt obliged to try it myself. It's a handy little project, since I can do it in the park across the street on my way home from work. And it only requires staying outside briefly. So despite the fact that the temperature hasn't risen much above 20° F in the last week, with consistently strong winds, there's no need to dress up specially, as I would for an extended deep-sky observing session.

What's the verdict? It's easy enough to make out that Venus and Mercury are extended objects, but it's pretty hard to see their phases right now. (Venus will be a different story once it starts to get huge and thin in June and July.) Even when I start right at sunset, Venus and Mercury are already so low in the sky that their images dance around at 60x, and extra magnification just makes things worse. Still, after a few minutes of viewing, Mercury remains subtly but consistently flatter on the side facing away from the Sun. I'm hoping that the phase will get easier to see as it gets thinner.

It's also sobering just how hard it is to locate Mercury right after sunset. Venus is a piece of cake, but it's seven degrees from there to Mercury — a long, long hop through a telescope's eyepiece with nothing but blue sky to mark the way. I'm usually more than happy star-hopping through a telescope with a simple alt-azimuth mount, but a nice equatorial or Go To mount would be mighty handy for this particular job.

I went out well before sunset yesterday to give my scope plenty of time to cool down and to locate Mercury as early as possible. Blocking the Sun behind a convenient hill, Venus was easily visible 10 minutes before sunset, and I located Mercury in the scope 10 minutes after sunset, when it was still 15° up. In addition, the seeing was much better than on my previous two attempts, so I got a pretty steady view at 120X. Mercury appeared to be a precise half disk, though in fact that phase was 42%. I thought I saw the phase at 60X too, but I'm not sure.

For quite a while now I have been interested in constructing
an equatorial platform for my 10" Dob.
In researching various web sites for information on contructing one I found that some of the information is out of date and am unable to locate some of the parts necessary to contruction. Mainly it's the electricatl parts.

I tried finding some articles in S & T online pertaining to the subject but did not find any. I enjoy S & T's articles on Telescope Making because they are detailed and tell you where you can find the parts necessary to construct the project. If there is an article in S & T on contructing an
equatorial platform it would be great to read it. If not
a future article on building one would be desirable.

Observing from bright city skies is not pig-headed- think of yourself as an evalgelist.

Look over the columns written by the late Walter Scott Houston in Sky & Tel issues from long ago and you will see descriptions of objects considered exceedingly challenging. Nowadays, modern telescopes, eyepieces, and filters can show such objects from surprisingly poor observing sites.

Here on Long Island there are no truly dark skies anywhere. Some places are better than others, but I recall one particular "triumph" using optics from a (literally) discarded Astroscan (4.25-inch f/4 Newtonian) rebuilt into a fiberglass tube. Using a 32-mm Tele-Vue Wide-Field 2-inch eyepiece and a Lumicon UHC filter, I showed the entire Cygnus loop (not just our prized Veil Nebula) to more than one surprised novice observer. One lady, then in her eighties, exclaimed delight and surprise at seeing it, and that is as good a test as any!

Keep trying and don't accept traditional admonitions and limitations as to what is possible. The limitations are only determined by the laws of physics and your own patient efforts.

Tony responds: I certainly agree with everything you say -- except possibly the comment about "modern" telescopes and eyepieces. Aside from better anti-reflection coatings, I'm not sure that the best telescopes and eyepieces are all that much better today than a hundred years ago. What's changed more than technology is people's attitudes.