There's a well-known rule of thumb for estimating light pollution called Walker's Law, formulated by the professional astronomy Merle Walker based on measurements in California. It postulates — among other things — that the level of light pollution is proportional to the population of the town or city that's producing it. As I said in my last blog, this is clearly untrue when comparing cities in different countries. But how well does the rule hold up within Canada and the United States? 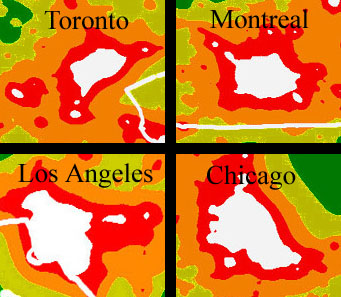 The six biggest metropolitan areas in the U.S., according to the 2000 census, are listed below in order of the size of their light-pollution blobs. This is the number of red and white pixels in the Light Pollution Atlas's world map (as best I can figure it after editing out coastlines) divided by the cosine of the latitude, to compensate for distortion in the map's projection. The number of (corrected) pixels per million varies from 39 for Los Angeles to 105 for the Washington/Baltimore conurbation.

And here are the four largest metropolitan areas in Canada according to the 2001 census:

Numerous caveats apply. As I've said many times, it's not at all clear how well the Light Pollution Atlas corresponds with reality. Maybe the apparent darkness of Los Angeles is due to the fact that it was blanketed in smog when the relevant satellite pictures were taken. Maybe the relative brightness of mostl Canadian cities is due to snow. Maybe there are errors in the methodology. Population statistics are also problematic.

But let's pretend for a moment that the data are correct. What could cause such big discrepancies? One obvious answer is population density. One would expect the New York metro area to have relatively low light pollution per capita because such a large fraction of its population lives in multifamily homes, which are far more efficient in every way than single-family homes. But Los Angeles is the archetypal sprawl city for the entire world, and my figures give it even lower light pollution per capita than New York.

Truth be told, Los Angeles is actually quite densely populated compared to the exurban sprawl that grew around many U.S. cities in the last few decades. L.A. did much of its sprawling in the 50s and 60s, and then was stopped short in most directlons by mountains and federally protected land. Many of the houses date to an era when a 1,500-square-foot home on a quarter-acre lot was considered extravagant. Streetlights are probably the single biggest source of light pollution, and they're proportional to the number of street-miles. The more closely houses are spaced, the fewer streetlights per house.

How about Montreal versus Toronto? A respondent to my earlier blog suggested one possible explanation. Montreal is in Quebec, whose vast hydropower resources make it a net energy exporter. The respondent claims that Hydro-Quebec encourages everyone to use as many lights as possible. Public policy can certainly have a big effect on light pollution, but so can the policies of individual electric utility companies.

Click here to download an Excel spreadsheet with data for many more metropolitan areas in North America and other continents.

Interesting effort - tough to do. Regarding Toronto (and probably other cities too) they are part of megapolitan areas with population bases much greater than the city population data accessed. Similarly the precision of the lght pollution data is low as only there are few levels graded - the top several limiting stargazing to identifying airplanes! Given these two factors, cities 'hemmed' in by mountains (Los Angeles, Vancouver) or rivers (NYC) may be at an apparent advantage. What's the "take home message" - none of these areas is useful for skygazing, all represent terrible wastes of energy and countless millions are deprived access to even a passable nightime sky.

Just one correction to your article. I live in Montreal and it's untrue that Hydro Quebec is encouraging the use of as many lights as possible, quite the contrary! The less electricity is used localy, the more is left for export which is sold at a much higher price. Now as why light pollution appears higher in Montreal, well, I unfortunately have no explanation. You can add the fact that electricity is much cheaper in QuÃ©bec to the equation.

Statistics donât lie. However as with all real world situations we must consider many variables. The light pollution per capita can be reduced if many people live and work in tall buildings. And, the sea and mountains limit the extent of cities like Vancouver resulting in a very high population density. Ottawa has a good restrictive lighting policy, but it has no such constraints on growth and sprawl, and the city has relatively few tall apartment and office towers. The posted data is a very good demonstration of these effects in both Canada and the USA.

The other comment about the fact that Hydro-Quebec does not encourage people to light up more is true. Hydro-Quebec has, and is doing quite a lot of efforts in terms of public advertising and energy efficiency initiatives to encourage citizens in reducing their power usage.

The real problem in Quebec (and Montreal) is the very low cost of the electricity provided by Hydro-Quebec, one of the lowest in North America. It's cheap, so people abuse without thinking about the consequences.

Saturday night around 9pm my family saw a bright orange ball in the southwest sky. it moved away and disappered only to reappear again, travel across the sky and disappear again. Was it the space shuttle??