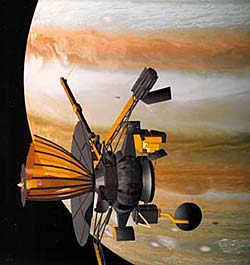 Did the Galileo spacecraft fly by anything we didn't know about?

Back in June, a press release from the Pluto-bound New Horizon's mission noted a successful imaging test of one of its cameras. The spacecraft was able to track a small asteroid designated 2002 JF56 as the two passed each other. The resulting picture wasn’t spectacular, but it once again brought to mind something I’ve wondered about for several years. The idea occurred to me when the Cassini spacecraft snapped an image of asteroid 2685 Masursky in January 2000 while on its way to a flyby of Jupiter.

There are many more asteroids known now than there were back when space missions were being planned (by an order of magnitude). I wondered if on their way to the outer solar system, did the Pioneers, Voyagers, or Galileo happen to pass by an asteroid that at the time was unknown? How many asteroid-imaging opportunities were missed because such-and-such object wouldn't be discovered for another 10 years? I don’t necessarily mean very close passes that would have been a hazard to the probe or gravitationally alter its trajectory, but flybys close enough that significant imagery could have been performed.

If such missed-opportunity asteroids exist, I thought it would be an interesting article for Sky & Telescope. But someone would have to figure all that out, and I sure couldn't do the computations! I sent the query to a couple of asteroid researchers, but no one had time to devote to it. Anyone want to give it a go?