Before the 200-inch Hale Telescope on Palomar Mountain was completed, 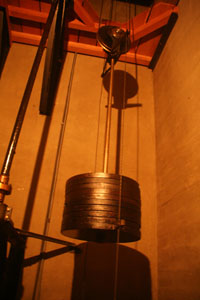 Until very recently, the 100-inch Hooker telescope was powered by a purely mechanical clock drive.

The big Mount Wilson scopes were put out of business as heavy-duty deep-sky instruments not so much by the construction of the much larger telescope on Palomar as by light pollution from nearby Los Angeles. But taking long-exposure photographs of "faint fuzzies" isn't all that big telescopes are good for. The bigger a telescope's mirror, the smaller the features that it can resolve. If you want to see small features on planets, or split tight double stars, you need a big scope to do the job. You also need steady air, or "good seeing," as astronomers call it. And here Mount Wilson has a natural advantage — by all reports, it has some of the best astronomical seeing in the world. This results from steady on-shore winds lifting ocean-cooled air over the mountain, the same conditions found in Chile, Hawaii, the Canary Islands, and most other sites for major astronomical observatories. 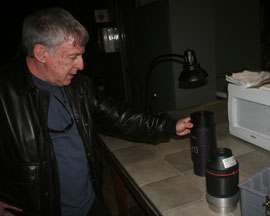 This good seeing allows the big telescopes on Mount Wilson to operate near their theoretical resolving limits on some occasions. I was given a tour of Mount Wilson by Mike Simmons, founding member of the Mount Wilson Observatory Association, contributing editor to Sky & Telescope, and most recently founder of Astronomers Without Borders. He has had many opportunities to view through the 60-inch telescope, which is now used primarily for public outreach. (You can reserve time on it yourself, if you can find a group to share the expenses.) Mike says that there have been times when he's been able to crank the 60-inch to its full theoretical 2000× or 3000× with no sign of degradation by the atmosphere. There are few places on Earth where that would be possible. 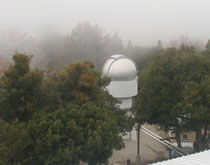 Each of the six CHARA telescopes is connected to the optical lab by vacuum pipes.

But even a 100-inch telescope isn't big enough to take detailed pictures of any star besides our own Sun. The Hubble Space Telescope, whose 94-inch mirror operates completely free of atmospheric distortions, is just barely capable of imaging Betelgeuse, but few stars appear even one-hundredth as big as Betelegeuse. To really probe the secrets of stars you need a telescope with a mirror more like 1,000 feet across, which is far beyond anything currently imaginable even with the most exotic and expensive technology. The way out of this dilemma was first shown atop Mount Wilson by Albert Michelson — the same Michelson who performed the paradigm-shattering failed experiment that paved the way for the theory of relativity. 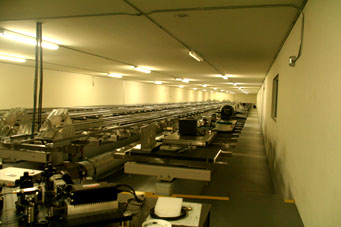 The Optical Path Length Equalizer carts for the CHARA array slide back and forth to compensate for Earth's rotation, which varies the distance between the target and the individual telescopes.

In 1920, Micelson placed two small outrigger telescopes on a 20-foot arm mounted atop the 100-inch telescope. He combined the light from the telescopes using interferometry to yield the first measurement of a star's diameter. (Betelgeuse, naturally.)

Almost 80 years after Michelson's experiment, Georgia State University's Center for High Angular Resolution Astronomy (CHARA) arrray became operational atop Mount Wilson. It consists of six one-meter telescopes scattered across the mountaintop. The light from the separate telescopes is brought to an optical laboratory where it is mixed together with exceeding precision and care. 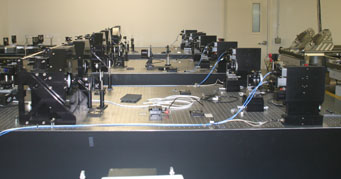 The light from the six beams is combined on the optical table. Microscopic actuators on the table equalize the beam lengths with micron accuracy to compensate for atmospheric instability and mechanical flexure within the array.

The beams need to be adjusted to make them act as though they were taken by segments of a single, 1000-foot-wide mirror. Just as a conventional telescope needs a motor drive to keep the mirror pointing the same way in space as Earth rotates under it, so the beams from the CHARA array need to be adjusted in length to compensate for Earth's rotation. And just as big telescopes need actuators to compensate for their mirror's gravitational stress, and (ideally) adaptive optics to compensate for atmospheric instability, so the CHARA array needs optical adjustments at the millimeter and micron scale to keep each of the beams equal in length down to a fraction of the wavelength of light.

The CHARA array claims a resolution of 200 microarcseconds, 250 times better than the Hubble's theoretical limit of 50 milliarcseconds. It's still nowhere near as good as a single 1,000-foot mirror would be, but CHARA has split many double stars that are far beyond reach of conventional methods, including doubles where the stars are so close that they actually touch each other. CHARA's most recent coup was an image of the dark clouds that causes Epsilon Aurigae's mysterious eclipses.

My best understanding of how Michelson used the 100" as an interferometer is that he constructed a large metal square tube and attached flat mirrors at each end of the tube to direct the light from Betelgeuse inward toward the optical axis. Two more flats then directed the beam from the outrigger-flats parallel to the optical axis of the 100" to be focused in the same way any light parallel to the axis would be focused.

The result of this arrangement was that interference fringes could be seen and measured at the focus of the telescope. Analysis of the those fringes allowed Michelson to determine the apparent diameter of Betelgeuse and several other stars. Using the best estimate of the distance to the stars, their diameters could be estimated.

"The CHARA array claims a resolution of 200 microarcseconds, 250 times better than the Hubble's theoretical limit of 50 milliarcseconds. It's still nowhere near as good as a single 1,000-foot mirror would be..."

Of course, the light gathering ability would be much less, just as Michelson's interferometer was compared to the underlying 100" scope.