My Definition of "Planet" 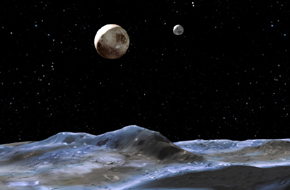 Is Pluto a planet or not? Its three moons don't help to categorize it.

OK, I've thought more about it. Here's my suggestion for the IAU (actually, S&T editor in chief Rick Fienberg said he made similar suggestions to the astronomers already):

There are eight planets. Everything else is an asteroid. That would leave moons as moons (a.k.a. satellites) and leave comets as a separate class of object. Asteroid is a perfectly fine word. No need for "minor" or "dwarf" planets or "small solar system objects."

We'll worry about extrasolar planets and "rogue" planets (loner worlds unattached to stars — like the Moon was in Space: 1999) later.