My friends sometimes ask me why so few of my articles appear in Sky & Telescope. I explain that I'm often too busy editing other people's articles to write ones of my own. Moreover, I do write one very important piece of S&T every month: the Sky at a Glance page that appears in the center of the magazine, right before the all-sky chart. This might just be the single most labor-intensive page in the magazine — but it appears without a by-line. 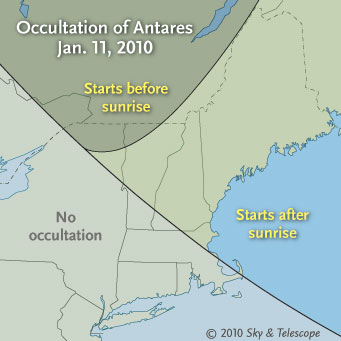 It's particularly challenging to figure out which events to include in the calendar. I don't want to omit anything important, but I also don't want to send readers on wild-goose chases, searching for events that will be difficult to see or boring to watch. I had serious doubts about including the occultation of Antares on the morning of January 11th. Occutations of 1st-magnitude stars are fairly rare, and this one was going to take place over a heavily populated area — including our own office. On the other hand, it was going to occur in broad daylight over most of that area. All of my calculations indicated that it would be visible through a telescope despite the bright blue sky, but in my heart of hearts, I didn't really believe it.

I didn't know exactly what to expect, because I was within a couple of mlles of the graze line — the border of the area where the occultation is visible. If my calculations were off by just a few arcseconds, the Moon might miss Antares entirely. And during a graze, the fact that the Moon isn't perfectly round becomes highly significant. A mile-high mountain at the right spot on the Moon's edge can move the graze line on Earth by a mile.

My best data suggested that the occultation would happen at 7:41, almost a half hour after sunrise. And as that time approached, Antares was (contrary to my fears) sitting nice and solid in the eyepiece. Then, at 7:39:45 — long before I expected — the star suddenly winked out. A couple of minutes later (I couldn't time it accurately), Antares re-appeared, presumably as I was looking through a particularly deep valley along the Moon's rim, glowed strongly for a few seconds, and disappeared again. Around 7:43 it appeared yet again, dimmed, brightened, winked a couple of times, and finally started to glow steadily again as the invisible unlit side of the Moon slipped away from it. 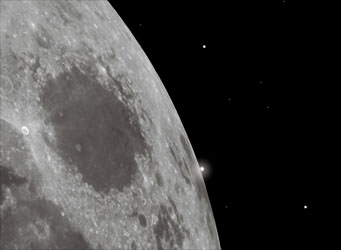 I've seen plenty of occultations before, but those were all simple affairs, where the Moon ran head-on over a star or planet. In such cases, the time of disappearance can be predicted to a split-second, and the star stays invisible until it reappears. In this case, I had only a vague idea when the occultation would start, and the brief halftime reappearance was a totally unexpected treat. It was far more exciting than I had expected.

Next time, I'll have my wits about me, and leave my voice recorder running trhoughout the event. That way, I can take scientifically useful readings, and sync the voice recorder to my watch after the whole thing is over. As it is, I have only the vaguest idea when anything happened. With such drama going on, I couldn't very well take time out to look at my watch!

A few of us from ATMoB and the Clay Center timed it and are filing reports. Check out the IOTA website for more predictions.

From my front porch in Connecticut I saw this (naked-eye) as an especially close conjunction of the Moon and a bright star. Didn't know exactly which one it was at the time, but it was a gorgeous sight. Then I looked in S&T for the explanation. You guys rock - thank you, Tony.