Between visiting Griffith Observatory and attending the Riverside Telescope Makers Convention, I visited the famous old observatories atop Mount Wilson and Palomar Mountain. I'll talk about Palomar first, even though I went there second. 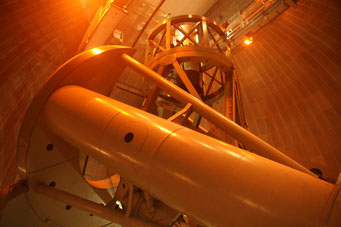 Although its mirror is modest-sized by modern standards, Palomar's Hale Telescope is probably the largest optical telescope ever built in terms of sheer physical size.

For those too young to remember, the 200-inch Hale Telescope at Palomar Observatory was the world's largest fully functional telescope from its completion in 1948 until the Keck-1 Telescope went online in 1993. (The 240-inch BTA-6 in southern Russia saw first light in 1975, but it has always been plagued with problems.)

The Hale telescope's incredibly long reign as the world's largest is probably due to the fact that it reached the end of the line of what's possible with tradtional 19th- and early 20th-century technology. All large modern telescopes have alt-azimuth mountings, like a canon's. These are very compact and stable, but they require a computer to calculate how much to rotate each axis to track the sky — or more precisely, to counteract Earth's rotation.

The 200-inch, by contrast, has an equatorial mounting, with one axis tilted over to be parallel to Earth's axis. This lets it track the sky with a simple clock drive, but it also makes the telescope structure immense. My ex-colleague Josh Roth did his doctoral work using the 200-inch. He said that when you're inside the dome at night, with the giant telescope tracking completely silently, you have a visceral sense that the telescope is standing still while Earth is rotating underneath it. 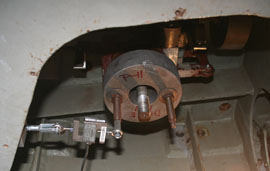 Modern giant telescopes use computer-controlled activators to counteract their mirrors' flex under the force of gravity. In the Hale Telescope, the same effect was achieved with a system of active supports controlled by weights and springs.

All large modern mirrors are also either composites of many small mirrors, like the Keck mirrors, or are built of thin glass blanks that sag dramatically under their own weight. In either case, the telescopes require complex systems of computer-controlled actuators to force the mirrors into the proper shape as they sag differently depending how high in the sky the mirror is pointed. The Hale mirror has the same problem, but the solution is strictly mechanical — the mirror supports have weights and springs that cause them to counterflex the mirror just the right amount. In effect, it's a distributed, mechanically based, analog computer — a startlingly effective solution.

It's gratifying to know that the Hale telescope, now equipped with the latest electronic detectors, is still cranking out scientifically useful data. In fact, perhaps because of the simplicity of its mechanics, it's considered a bargain — very cheap to operate considering the amount of data it obtains.

The lead to the article says the telescope is still operating 62 years after becoming "operational." I suppose "operational" is subject to interpretation. The telescope began regularly scheduled astronomical observations on Nov 12, 1949, slighly more than 60 years ago (source: Bowen, I.S. 1950. Final adjustments and tests of the Hale Telescope. Pub. Astronomical Soc. Pacific 62(365):91).