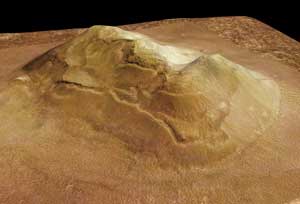 Surprise! The Mars Express spacecraft's portrait of the Face on Mars doesn't look much like a face.

I guess I'm a bit jaded when it comes to astronomical imagery. There are a lot of great photographs, but sometimes my reaction is simply "that's a nice photo," with little awe. For example, photographs that show the analemma always impress people, but it's getting to be old hat for me. My colleague Dennis di Cicco was the first to capture the analemma in a single frame nearly 30 years ago.

The Face on Mars is also old hat. Although photographs from Mars-orbiting spacecraft have shown the feature as an eroded land form, there are still true believers that can't be swayed. That's why I enjoyed Monday's caption for the Astronomy Picture of the Day when the site featured a just-released 3-D image of the Face taken by the European Space Agency's Mars Express spacecraft. Some people make a little too much out of situations when we see familiar shapes in natural objects. We see faces in rocks or the Virgin Mary in water stains because our brains are wired that way, not because they actually are faces or manifestations of biblical figures. I enjoyed the succinctness of the APOD caption, but since my laundry doesn't smell like root beer, I'm not clear on that reference. (I do like root beer, however. Have you tried some with lime?)

And while I'm noting a daily-photo site, I can finally put to rest the mystery of the "crater" in northern Canada. Jesse Allen of the Goddard Space Flight Center wrote to me yesterday saying that the feature was discussed recently at NASA's Earth Observatory's Image of the Day. It's not an impact feature, just some salt.

Don't have cash to buy a house? Worry no more, just because this is achievable to receive the mortgage loans to work out such problems. Hence get a credit loan to buy all you require.