Most amateur astronomers don't make their own telescopes, but amateur telescope making still plays a central role in our hobby. Partly, it's continuity with the past. Serious exploration of the world outside our solar system began when an 18th-century musician named William Herschel taught himself how to make telescopes — and discovered, much to his surprise, that they were far superior to any others in existence. Amateur astronomy started to become a mass movement in the United States when a man named Russel Porter, who later worked on the design of the 200-inch Hale Telescope, taught some seasonally underemployed Vermont machinists to make their own telescopes. 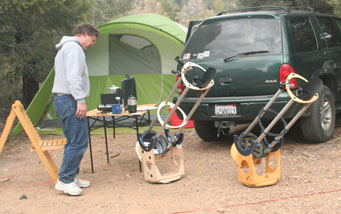 Eric Shrader and two of his travel Dobs.

Partly, it's because a handmade telescope is a thing of beauty. And it's proof that telescopes don't have to be scary. They're basically simple devices: easy to assemble, disassemble, and modify. And while commercial telescopes are cheaper, better, and more diverse than ever before, there are still a few important niches that commercial manufacturers haven't filled. Chief among those niches is the large-aperture travel scope. When I wrote my recent blog about travel scopes, I had actually intended to talk about this subject, but I got side-tracked by other issues. So I was very pleased when, at RTMC 2010, I stumbled on Eric Shrader and his remarkable collection of travel Dobs. 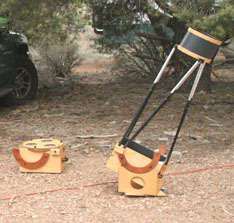 These are two identical 10-inch Dobsonian telescopes. The scope at right is fully assembled, while the left one is packed for travel. Everything except the connecting rods fits easily in an airplane's overhead bin.

If you want the largest possible amount of light-gathering power that can be carried safely on an airplane, the travel Dob is the only serious choice. Eric's Dobs are masterpieces of form and function — beautiful to look at, even more beautiful to look through, and extremely easy to operate. I was seriously tempted to buy one right then and there. One wonders why none of the major commercial manufacturers have tried to streamline their truss-tube Dobs to make them airplane-portable — but they haven't, at least so far. I've always wanted to build myself a travel Dob, but never had the time. Maybe I'll try to buy one from an amateur telescope maker for my next observing-related airplane trip. I would end up with six times the light-gathering power of my 4-inch f/6 refractor in a package that isn't much larger or heavier. 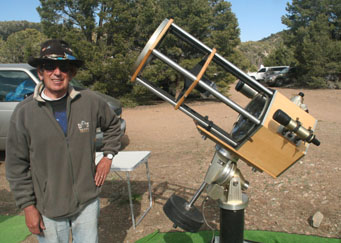 I can't possibly do justice to all the interesting telescopes at RTMC 2010. But of the many I looked at, one caught my eye in particular. This was Bob Pfaff's 12.5-inch Schmidt-Cassegrain telescope (SCT), which won the Astronomer's Choice Award at RTMC 2008. This is a design that's ubiquitous in the commercial world, but you rarely see amateurs undertaking it, because it requires exotic, challenging curves for the corrector plate and secondary mirror.

Unlike standard commercial SCTs, which are designed primarily for compactness and convenience, Pfaff's is designed for optimal optical performance. This requires putting the corrector plate much farther forward, yielding a longer instrument, but it also eliminates coma, the bugbear of most reflecting telescopes. Theory aside, Pfaff's telescope performs beautifully on the night sky. And it's a joy to behold during the day, too.

Really enjoyed reading about the home made telescopes on display at the RTMC 2010.

Thanks for mention my friend Eric. His work is amazing. Had I know what I know now, I'd have bought my scopes from him! Anyway Eric made his own grinding machine and then started making his own mirrors. Then he bought a surplus vacuum chamber and now he aluminizes his own mirrors as well! He's an under-reported on ATMer. 🙂 Maybe some of that would make a good article for Gary's use in the ATM column.