It was at NEAF 2010 that I first conceived the idea that culminated in the review of Three Low-Cost Telescopes in the March 2011 issue of Sky & Telescope. 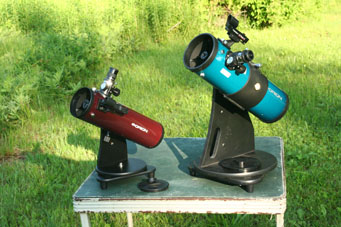 The Orion SkyScanner 100mm (left) is half the cost and weight of the Orion StarBlast 4.5 Astro, yet its mirror is nearly as big.

I was attracted to the Orion SkyScanner 100mm TableTop Reflector as soon as I saw it. I've always been a huge fan of the Orion StarBlast 4.5 Astro, and here, apparently, was a telescope almost exactly half the weight and cost of the StarBlast, yet sporting 88% the aperture, for 77% as much light-gathering power. Could this really be 77% of a StarBlast for half the cost?

The short answer is no — the SkyScanner falls short of the StarBlast in several obvious and not-so-obvious ways. In fact, my expectations were so high that my intial reaction was disappointment. 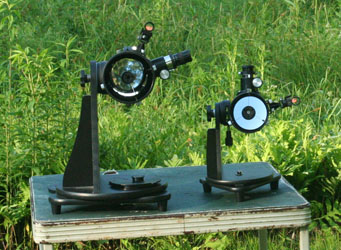 The StarBlast (left) offers ample clearance between the mirror and the tube, unlike the SkyScanner.

How is the SkyScanner inferior to the StarBlast, aside from its slightly smaller aperture? First, its mirror isn't diffraction-limited. And the mirror is affixed solidly to the back of the tube instead of being in a standard cell with collimation screws. And there's hardly any clearance between the tube and the light path. That's what makes it possible for the scope to be so small and light, but it also makes its cool-down time much longer.

More subtly, the SkyScanner lacks one of the unusual features of the StarBlast — the ability to rotate the tube in its rings. That makes the StarBlast extraordinarily easy to use on a tabletop; you can always rotate the eyepiece into the ideally comfortable position. Mind you, it's hardly fair to criticize the $100 SkyScanner for lacking a feature that's also lacking in most commercial Dobs — even ones costing thousands! 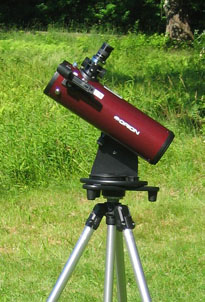 The Orion SkyScanner is shown here attached to a set of Bogen Manfrotto 3011 photo-tripod legs — a very solid and convenient arrangement.

On the flip side, the SkyScanner can be attached to any standard photo tripod with a detachable head — a very convenient arrangement. The StarBlast isn't threaded for photo tripods, and even if it were, it would be too heavy for all but the most robust (and expensive) professional-caliber tripods. So in practice, the StarBlast requires either a sturdy table or some kind of custom-built support.

But now let's forget about the StarBlast, and compare the SkyScanner instead to a standard commercial 60-mm refractor selling for exactly the same price. The refractor probably does a better job on the planets, but that's the end of its advantages. The SkyScanner gathers fully 2.7 times as much light as a 60-mm refractor, making every star and deep-sky object appear a full magnitude brighter. It's much easier to carry and store. And its mount is a joy to use.

What's the moral? If you want the most aperture possible for $100, or if you want an ultraportable scope that can be attached to a standard photo tripod, by all means buy the SkyScanner. It's a fine scope despite its limitations, and it won't disappoint you. But if you have $200 and don't mind a somewhat heavier and bulkier telescope, you'd definitely do better with the StarBlast, which is a timeless classic.

I'm kind of two-faced -- I'm saving up for a high-end apochromatic refractor in the 4"+ range, but at the same time I'm looking for an inexpensive, lightweight computerized mount for my Meade ETX 90mm Maksutov-Cassegrain optical tube so I can show sunspots (and next year's Venus transit!) to schoolkids without having to steer my altazimuth setup. In the January issue you called out the $200 Celestron LCM mount as a "2011 Hot Product," and I've found you can get the LCM 60 for about the same price -- effectively a free 60mm telescope, which I won't sneer at even if it's no 4" apo. However, the one review of the mount (and scope) that I've seen, on Amazon.com, was utterly devastating. Can you follow up on your "Hot Product" listing with at least a quicklook blog review like this? Thanx.

Thanks for these small scope comparisons! I’m currently using the Skyscanner to hunt down as many deep-sky objects as I can at a suburban site (“orange zone”) near Los Angeles (please see the Cloudy Nights forum titled “Orion tabletop telescopes”, where I've just contributed a rather long post on my Skyscanner experiences). Like Josh, I would love to see a review comparing the two different Starblasts (I own the larger 6 version, which has seen very limited use since I'm still busy with the Skyscanner). Cheers.

Does anyone have any information comparing the 100mm Skyscanner with the 75mm Celestron First Scope? (Which I suspect come from the same factory?). I have the FirstScope, and I absolutely love it. It is so portable, it goes everywhere, and people love the images it gives. I was considering buying the somewhat larger 100mm scope, but was wondering how the two compare?

Richard - besides the Skyscanner, I own the Orion 76mm Funscope, which is practically identical to the Firstscope in the tube, mount and mirrors (made by the same factory?) and has the same retail price of $49.95 (however, it also differs in some other important ways). Here are my comparisons:

1) The Funscope/Firstscope uses a spherical mirror, while the Skyscanner uses a parabolic mirror. This results in MUCH less distortion of stars away from the center of the field of view with the Skyscanner, resulting in more pleasing starry views.

2) The additional 24 mm of aperture allows you among other things, to begin resolving the brighter globular clusters (especially with darker skies), which you can't do with these 76 mm scopes.

4) Has a thread to attach a photo tripod at the bottom of the base (the Orion Funscope has this as well).

5) The eyepieces supplied with the Skyscanner - 20mm & 10 mm - work very well (both sizes also come with the Funscope). It gives magnifications of 20X and 40X on the Skyscanner (15X & 30X on the Funscope) to provide nice wide field views. Not sure if the 4mm eyepiece that comes with the Firstscope (giving a magnification of 75X) is very useful - I've heard many complaints about it (images too dark because of the high power, field of view too small).