In this blog, I want to start exploring a subject that's always fascinated me — the relationship between stargazing and science fiction. Logically, there's no connection at all. But human beings don't live by logic alone. Most stargazers that I know are, or have been, science-fiction fans. Moreover, many cite science fiction as the main thing that got them interested in astronomy in the first place.

The historical connection is also intimate. Science fiction isn't a well-defined genre, so it's impossible to say when it started. It shades into fantasy and allegory, which were major literary genres in the Middle Ages and early Renaissance, and they in turn shade into mythology, which is the oldest genre of all. But space flight, that staple of science fiction, became a literary theme alost as soon as Galileo first turned his telescope to the sky. 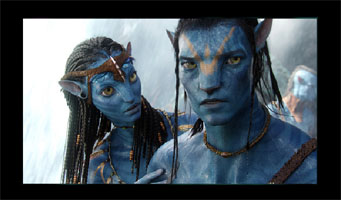 I recently saw the movie Avatar, and was surprised how much I liked it. I had low expectations, having been told that it's corny and unoriginal — which is certainly the case. But that's somewhat missing the point. If you view this film as a piece of mythology, then unoriginality is a plus rather than a minus. All myths are derived from other myths; the more references they make to earlier works, the better.

One theme of Avatar that particularly interests me is nature versus technology. The primitive life of the Navi is presented altogether sympathetically, while the mining operation is presented altogether unsympathetically. But it's not quite as simple as nature good, technology bad. Our first view of Pandora is of giant machines tearing the land apart — clearly evil and ugly — but the spaceship that brings Jake there is lovely. And the technology that allows Jake to walk the world in a different body is quite clearly good — constructive rather than destructive. In Avatar, the scientists are the good guys.

So it is with stargazing. I see two clearly different strands among amateur astronomers. One camp sees astronomy as a fundamentally technological pursuit, and is drawn toward machines and mastery. The other, which sees it as a branch of nature study, is drawn toward simplicity, and toward admiration as opposed to manipulation.

But in practice, just about everybody I know — me included — straddles this divide, has a foot in both camps, though in varying degrees. Most amateur astronomers don't pretend to be "real" scientists. But we share in common with scientists the desire to probe and manipulate our subjects while at the same time respecting their integrity. It's often a tricky balancing act.

For related ruminations, see:my blogs on Equipment and
The Meaning of Stargazing. Or click here to see my 15 most recent blogs.

"Our first view of Pandora is of giant machines tearing the land apart -- clearly evil and ugly" Exactly why I refuse to see Avatar. It protrays the capitalist system (America) as being greedy, heartless, pilagers of the land, who kill and destroy to get what they want. I'm sick and tired of having my country run down by our own people!

Sorry, but our country has a long, sorry history of "greedy, heartless" pillaging done in the name of "holy capitalism," whether you like it or not. Check out the late historian Howard Zinn's classic, "A People's History of the United States." I'm sick and tired of listening to people trying to re-write parts of our country's history they don't like...

I've found in my local astronomy "community" the same distinct "two camps." I call them "gadget guys" (or "gadeteers") and "observers." The "gadgeteers," obviously, love discussing their scope gear: eyepieces, f-ratios, and all the extra "gadgets" they're constantly buying. The "glass pushers," the telescope makers, fall in this camp, too. The "observers" tend to be more interested in actually studying the objects they hunt for, with or without computerized telescopes. There is some overlap as well.

There's a place for all types in amateur astronomy!

Back in the bad old days, capitalism was utterly unconstrained by morality. Today, the situation is nicely summed up by Selfridge in this movie: "Killing the indigenous looks bad, but there's one thing shareholders hate more than bad press -- and that's a bad quarterly statement."

A delightful movie. And I also fall into the category of stargazing for technology and nature; I find both appealing. Those are two of the things I liked about the movie.

And yes, the spaceship is pretty cool, so the movie certainly isn't anti-tech.

I've heard some who viewed Avatar complain about it being anti-military, but the main character was military and proud of it. And heck, the natives had their citizen military, too.

I've loved astronomy all of my adult life and most of my childhood. I've even created my own website (ancientsuns.com), had a career with space art (even used in a Hollywood film), and co-authored a science fiction novel, "Touch the Stars: Emergence." And as a software engineer, I just had to write my own 3D astronomy software (spacesoftware.net). In my lifetime, I'm glad that science fiction has become more broadly accepted, and especially glad that astronomy is touching the lives of so many people.

I am an automobile mechanic, so I handle tech all the time (almost) sands love stargazing with plain eye sight, (binoculars or telescope when available. I have not seen the Avatar movie, so I can't say about it. I like Science Fiction, but it never takes into account that Life is Gravity born, not Space born.

What really strikes me, is how a marvel like PC's or Lap's with Internet coneccions, (most are wireless) are used for personsal wars. This article is writed in a good maner, but somwe people inmediatlya feel the need to brand different swords malinterpreting issues like ignorants, not as scientists (not all, but I refrain from names because rhis is a statement not a personal acussation)

Good article, despite some non desserved comments I enjoyed it. Bye!

Science fiction opens many doors to the imagination, but also to new technologies. One of the most praised authors, Arthur C. Clarke, who was a scientist, invented a lot of possible technologies, such as the space lift, or using the energy of mini-black holes for travelling to the stars.
I greatly appreciate the work of author Ben Bova, because his "space thrillers" have a strong scientific background. I would particularly recommend "Moonrise" and "Moonwar" (a masterpiece, in my opinion), and the for novels about the Asteroid wars, or the two books "Mars" and "Return to Mars", which really make you feel as if you were on Mars !

Some people may think that Avatar is anti-American, anti-Christian, anti-Capitalist...etc, but reactions like this to immediately criticize the movie are a natural reaction for many. But really, there is a much deeper message hidden within all of this that is hard to grasp but not as difficult to describe. While a few Americans found the movie to be against everything that America is, the Chinese government, upon viewing the film feared unrest and warned that the movie provides too much of an American cultural influence. Natives in the Amazon whose forest and lifestyle are being destroyed by loggers, and whose story is obviously shown by Avatar, have found an ally in the film. In fact, I watched the movie in German, a language I don't understand and saw more of the message than the conversations of the movie. What this led to was a greater understanding of the message, yes, of philosophical significance. To some commentors the movie may seem to be escapism, and in fact some people have gotten suicidally depressed because they knew that the real world is not this fantastic, but the whole Na'vi world is a metaphor for human greed against nature, humanity against itself. There are plenty of themes that can be deduced from the movie and what it really presents is a mirror to ourselves. One final comment is that "The Hurt Locker" won twice as many awards in the Oscars as Avatar did, which suggests that people prefer war twice over peace.