As I've written before, I love to combine hiking and astronomy. Unfortunately, there are several practical obstacles to doing this. 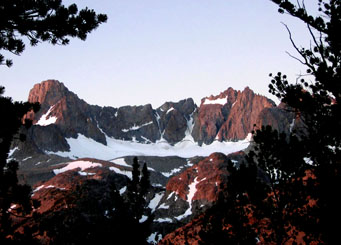 A few weeks ago, my wife and I took a 5-day backpacking trip in California's Sierra Nevada mountains — our first long hike since adopting our daughter. (This doesn't count a modest trek in the Himalaya which was thoroughly enjoyable, but in many ways more of a circus than a serious hike.) Odd to think of 5 days as long; I can remember when a 2-week hike seemed short!

On this recent trip, I certainly wanted to take advantage of the Sierra's famously dark skies and excellent transparency to do some stargazing, but my primary goal was to make the most of the mountains — to see as much as possible and climb as high and steep as possible. 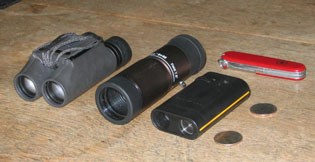 Sadly, at age 56, after leading a primarily sedentary lifestyle, there's a limit to my ability to exercise hard all day and then stay up all night. Moreover, there's a limit to how much astronomy equipment I want to carry in addition to tent, sleeping bags, cooking gear, food (in bulky bear canisters), and warm clothing. In retrospect, I wish I had brought my image-stabilized 10×30 binoculars, but in fact I saved a pound (and considerable bulk) by taking my 8×32 monocular instead. The monocular worked OK for picking out climbing routes on the crags, but binoculars would have been much better for astronomy. 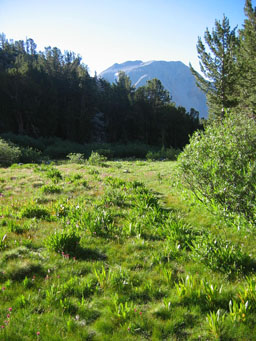 Another thing that people unfamiliar with mountains tend not to realize is that it's often hard to find a spot with a good view of the sky. In the Sierra Nevada, trees grow well above 10,000 feet, and trees are the worst enemy of astronomy. The second worst enemy are the mountains themselves — the more rugged the terrain, the more of the sky is blocked by nearby mountains. Bare mountaintops have unobstructed views but are extremely inhospitable places to spend the night.

So for our last two nights in the Sierras, I picked out a campsite specifically for its astronomy potential. A high meadow at around 11,000 feet, it had enough trees to provide shelter without blocking too much sky. And it faced south to a notch on the opposing ridge, allowing a nearly unobstructed view of the southern sky — the part that matters most for astronomy.

What stargazing could I do despite my limited equipment and even more limited energy? Quite a lot, it turns out. On the first night, I solved the time problem by taking a nap after supper, then rising toward the end of twilight, cooking cups of cocoa for me and my wife, and then pointing out the sky's highlights to her. After she returned to her sleeping bad, I stayed up for an hour or two observing dark lanes in the Milky Way — a job that requires very dark skies but very little optical aid. 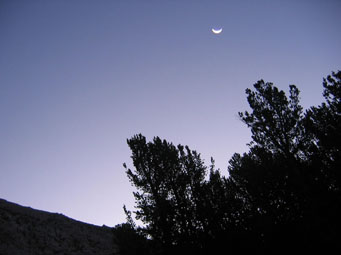 The last night we were camping I woke up at 3 a.m. to watch for early Perseids. There weren't many (this was the morning of August 7th, 5½ days before the peak), but the ones I saw were mostly quite bright. Between meteors, I puzzled out the constellations around Sculptor and Fornax, a part of the sky that's hard to see from my home in Massachusetts, and also one that resists easy memorization.

I could not, alas, explore the splendid galaxy fields of these two constellations, due to the limitations of my equipment. But my 8×32 monocular did provide a reassuring view of the big, bright galaxy NGC 253. When all is said and done, it doesn't take a big telescope and lots of time to enjoy the night sky. Even a half hour of naked-eye stargazing is enough to slake my craving for astronomy — for a while.

First I would like to say that even few minutes are worth when you are outside looking at a clear night sky. One forgets the whole world and the tragedies going around. Thanks for your story.

Last night, I was looking in my telescope, I have to mention that I am a beginner, only a couple of years, but I am trying. What I saw was a dark hole and besides it another whole where a flash went twice, I saw it and am sure about it, could you tell me what is it? Thanks for any information, I must say again that it is from Lebanon and up in the mountains where I live, the sky is so near and the stars ever so shining!

"...she returned to her sleeping bad." is not necessarily a typo. It's sometimes difficult to sleep at 11,000 feet. One challenge with stargazing in our really dark skies at altitude is finding the familiar constellations. The normally dim stars are so bright that they can compete with the usual guide stars. Not a cause for complaint!

Kudos to you and your wife for immersing yourselves in a lengthy nature trek. At 11,000 feet, unless you are used to high altitudes, it would be normal to feel tired because of the rarified air. Thanks for your great story! DK

I too noted the typo about a sleeping BAD...brought back memories of some of my hikes!

I found a good light set of binoculars useful but even if you forgo any opticaL aid the very dark skies will yield great views just using your "occular unit". I remember some memorable trips where I enjoyed laying in my sleeping bag in the open air and letting the evening sky fill my senses. The music of the night (insects, animals, wind rustling leaves) provided the mood "music" for a planetarium show that not even the worlds best planetarium could match. The frequent satellite, meteors, etc. provided additional treats.

Tents are great but you may want to lay out in the open sky for a while. Warning though....you may find this so delightful that you will wake up in the morning still laying outside of your tent.

Great article, thanks. I too love to combine hiking and nighttime skywatching in the Sierras. My solution is to select a destination one or two days hike from the trailhead, hike in, and then spend a couple of days camping there, taking lazy day hikes and naps during the day and skywatching at night. Sleeping out is also an attractive option, if it's not too cold, damp, or buggy. Under a truly dark sky, naked eye skywatching is a huge treat, although I also take my 10 x 50 binoculars (and always wish I had brought my 15 x 70's!).

Hi, great article.
I love hiking in mountains and astronomy too. I live in a city so I have very little opportunity to watch Deep Sky. At home I use telescope for planets and very rarely drive to the countryside for DS observation.
That's why I used carrying for mountain hiking binoculars for astronomy. I started with my first 15x60, then changed for 10x50. I've also encountered problems similar to the autor of this article: weight and packing cababilities etc. The another one is unstable weather in my country and some places I visited carrying big binocs in my backpack.
on my personal experience I can state the biggest bino for serious backpaking astronomy are 10x50 glasses (or maybe 56 mm for people familiar with heavy backpack). 60 mm is definitely too large. Not mainly due to its weight, but size. 10x50 can be relatively easily packed between your clothes and sleeping bag. You can still use it for casual terrestial observation of landscape or animals, but of course not like a pocket compact glasses. Choose rather very solid model, even little more heavy -my light, cheap 10x50 has already miscolimated after few years use. Prepare for frequent trips with binocs without its any use -weather is your enemy. Don'take big glasses when you know conditions are not O.K. -Moon on the sky, no chance for weather etc. But on these rare succesful occasions you will never forget the beauty of the sky in mountains.
The best Andromeda Galaxy I've ever seen was in Kackar Mountains (Turkey)with my first 15x60. The another great view was Saggitarius high above horizont in Iran seen from above 3000 m
-J.
P.S. For another astro-backpacking activity like total solar eclipse I recommend another set: poket bino 10x25 and small compact telescope on a tripod. My 80/400 has already visited Turkey, Siberia and China. In Novosibirsk our main luggage with the tripod was delayed in Moscow airport, so I had to hang my scope on a pole with shoe-laces and tape (it really worked with 20x!)