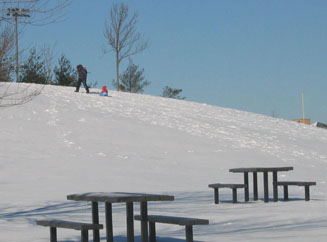 My favorite spot for stargazing in Cambridge, MA, doubles as the city's best sledding hill. (This is the gentle side; the steep part's much more exciting.) It's fun to slide down day or night, but I would hate for my telescope to try the same trick.

I’m writing this on the evening of Thursday, February 15th. Yesterday at the same time, the first significant snowstorm of the season was in progress. That’s bad news for stargazing, as I’ll explain below, but great news for me. I’m always eager for snow, and it had begun to look as though there wasn’t going to be any this winter.

I love snow and stargazing for much the same reasons. They’re beautiful, they give me an excuse to go outside, and they transform everyday reality into something strange and sublime. Snow’s certainly not convenient – even as I type this, my shoulders are aching from shoveling and ice-chopping. But there’s also nothing convenient about going out in the dark and the cold (or bugs) to view the sky when all sensible people are fast asleep.

One great charm of snow is its variety. Not only does every snowstorm have its own unique character, so does every snowflake. They appear identical at first glance, but when you examine them closely, no two are alike. The broad principles of snowflake formation are well understood, but the details are complex and mysterious.

All of that applies equally well to stars. They appear alike at first, but their details are infinitely varied. Even our own Sun, the only star scientists can study in detail, remains largely a mystery. Stars and snowflakes even look alike – sort of. Ask a child to draw both, and you may have trouble telling which is which.

The flip side is that it’s a clear night at new Moon, and I’m not outside looking at the stars. Why? Time is always scarce on a weeknight, and all that shoveling set my schedule back several hours. Streetlights reflecting off fresh snow increase skyglow tremendously, so it’s actually brighter here in the city than it would be at full Moon without the snow. Also, this was a really messy storm; it snowed, then rained, then turned back to a fine powder as the temperature plummeted. That left a surface that looks like snow but is hard as a rock. And as often happens after a storm, a stiff breeze is blowing from the northwest. If I set up a telescope in any of my normal observing fields, it would sail gaily off into the distance.

In other circumstances, I’d resent the lost observing opportunity. But after fourteen months with hardly any snow and two weeks of nearly clear nights, it’s refreshing to experience the magic of nature at a distance of inches rather than light-years.