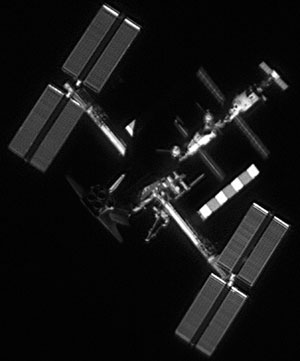 The Space Shuttle Atlantis is docked to the International Space Station as seen on June 19th high above Boston, Massachusetts. Click on the image to display the full-resolution view (2.5 megabytes) with details.

If you look at the Astronomy Picture of the Day every morning like I do, you've already seen the most fascinating image of the recent Space Shuttle mission to the International Space Station: the stunning ground-based view of the two docked taken by local boy geniuses Ronald Dantowitz and Marek Kozubal, as shown at right.

Ron and Marek work at the Clay Center for Science and Technology of the Dexter and Southfield Schools in Brookline, Massachusetts. They've been doing this kind of thing for years, perfecting software to allow telescopes to track orbiting spacecraft to be able to image such distant and fast-moving targets crisply (see Ron's first article about the technique in the August 1996 issue of Sky & Telescope, page 86).

I can clearly remember visiting Ron when he worked at the Boston Museum of Science and him letting me watch an orbiting satellite through the eyepiece. It wasn't the shuttle, and showed no detail, but it was very cool to see a dot in the exact center of the field as the telescope slewed and stars whizzed by. 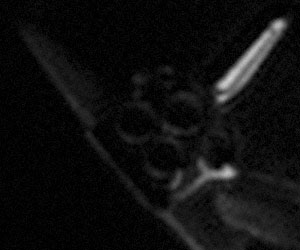 This detail of the image shows the back end of Atlantis at full resolution.

Ron sent us a preliminary version of the image last week. Actually, he mistakenly dialed my phone when he was trying to call Kelly Beatty about the image that he had just e-mailed. So, for what it's worth (not much), I was first person here to find out about it! To me, the best part is the detail of the shuttle's main engines as we look up the orbiter's tailpipes.

The photo is a great capper to the shuttle mission that provided several impressive flyovers of Boston.

"That image is the finest satellite image I have ever taken," Ron says, "and is testament to the need for good optics, good seeing, and good technique." As Teal'c would understatedly reply, "Indeed."