I'm not usually much of a party animal. My favorite way to stargaze is alone, second favorite with one companion, with group observing a distant third. (This doesn't count manning a scope at a public viewing, showing stuff to other people, which is always fun.)

But Stellafane is a bit of an exception. It's always entertaining to see the funky and imaginative instruments that have been entered in the telescope-making competition. Besides, I have a family tradition to uphold; my great-uncles Ralph and Ernest were charter members. 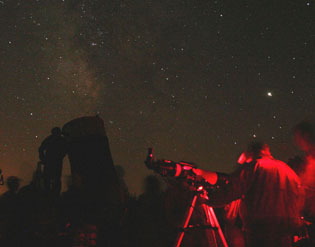 An observer at a Big Dob stands silhouetted against the Milky Way high above the bustling crowd at Stellafane.

With light domes in many directions, the skies at Stellafane are very far from pristine. But they're still one notch darker than my country home, where I usually observe. That's enough to make the Dark Horse Nebula (a.k.a. Pipe Nebula, a.k.a. Llama) in Ophiuchus faintly visible to the unaided eye when the transparency is good, as it was on Friday night. Those of you in the American Southwest who scoff at that as a criterion for darkness should remember that your latitude gives you a big leg up. Dark nebulae are a lot easier to see 40° above the horizon than 30°!

Spending a full day yacking with fellow enthusiasts is more than I can handle. Fortunately, Stellafane is also close to some pretty decent hiking — the one activity that I might like more than stargazing. It's rare for me to find an important mountain in the Northeast that I haven't already climbed, but for whatever reason I'd never before been up Ascutney, Springfield's local showpiece. It does have a road up it, but the road stops ¾ steep miles below the summit, giving casual visitors just enough of a workout to feel that they've accomplished something. 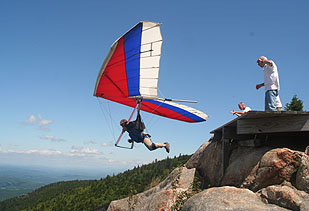 I, of course, hiked all the way up from the bottom. In case anybody else wants to do so, I highly recommend the Weathersfield Trail. A side benefit is that it passes a hang-glider launching pad, where I spent an hour or so listening to a completely different bunch of enthusiasts jabbering about why their hobby is in decline. It was also interesting to hear them talk about the weather. Weather is critical for stargazers, but it's literally life and death to a hang-glider pilot.

The only problem is that I'm getting too old to observe all night and hike all day. (I also climbed Mount Monadnock, which happens to be directly on route from Boston to Stellafane, both on the way there and back.) To some extent, I was too tired to do Stellafane full justice. It's a shame to go to bed (or rather, sleeping bag) at 2 a.m. on a clear night. 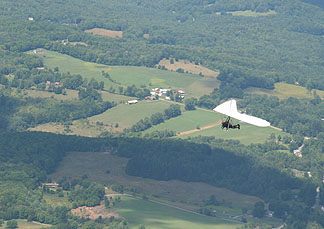 Still, there's something restful about being in the serenely beautiful state of Vermont. There aren't many other places in the U.S. where topography, forest, farms, towns, and culture fit together so harmoniously. The weather could hardly have been nicer, with temperatures around 80 during the day and the 50s at night, and hardly a mosquito to be seen or heard. There were intermittent clouds on Saturday night, but it would be unreasonable to expect two perfect nights back to back on a new-Moon weekend in the Eastern U.S.

One highlight of observing was getting my first really satisfactory view of the Star Queen in M16, made famous to the public as the Pillars of Creation. All it takes is an O-III filter on a 28-inch Dob at a reasonably dark location! Also, spending an hour or two observing with Sue and Alan French. (Alan is one of the judges in the optical competition.) Memorable quote from Alan to Sue: "I can't believe that I just observed an object that you've never seen!" There's not much in the sky or about the sky that Sue doesn't know.